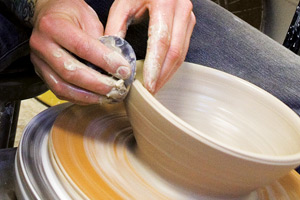 Today, as the School for American Crafts celebrates its 60th anniversary, the school’s reputation for quality programs and faculty, combined with the caliber of its students and alumni, make it a force among the top craft schools in the country.

Originally established at Dartmouth in 1943, the school moved to Alfred University. In 1950, RIT President Mark Ellingson persuaded Mrs. Vanderbilt Webb to bring the school to RIT.

In the current academic year, the school marks another milestone with the opening of a new, state-of-the-art facility. RIT Trustee Richard Sands, chairman of the board of Constellation Brands Inc., and members of his family donated $2 million toward the renovations. Now called the Sands Family Studios, the 14,000-square-foot area includes expanded studio spaces inside the James E. Booth Building and an addition on the building’s west side. The new facilities include 16 kilns, two glass-blowing furnaces and a work-yard area that students can use for iron pours, welding and raku firing.

“Over the years, I have honed my own skills as a wood craftsman,” says Richard Sands. “My family and I are very proud to support the new studios that aim to guide students to discover the intricacies and joy of creating with their hands.”

The school offers graduate and undergraduate study in metals and jewelry design, ceramics and ceramic sculpture, glass and glass sculpture, and woodworking and furniture design.

“I’ve taught around the world and have seen some stellar facilities, particularly in Japan and Australia,” says Michael Rogers, professor of glass at RIT. “Our facility is now truly of international standards. The school has always been distinguished and historically significant. And now the contemporary facilities match the reputation of our programs.”

RIT has a longstanding reputation for its fine arts offerings, including the crafts programs. U.S. News & World Report’s 2009 edition of America’s Best Graduate Schools ranked RIT near the top in numerous fine arts categories. The glass art program was rated second in the nation.

Richard Hirsch ’71 (MFA), ceramics professor, was one of the last students to study with Wildenhain.

“After I graduated from RIT, I taught at Boston University until 1987. RIT Dean Robert Johnson asked me to come back to teach and fill Wildenhain’s role. This was a great honor for me.”

Hirsch says the programs have evolved to reflect changes in the mediums.

“In 1971, the ceramics students were either making pottery or vessels. Today there is a huge spectrum of work from functional pottery to vessels to figurative sculpture to installations. And there is a new interest in mixed media throughout the school. With the new facility we are able to accommodate more interaction and collaboration among artists.”

Ben Wilson, a fourth-year metals student and native of Watertown, Conn., spends a lot of time in the new forge area working on his sculptures. He credits his metals professors, Juan-Carlos Caballero-Perez ’94, ’01 (metalcrafts and jewelry, MFA) and Len Urso, for his success at RIT. Last year, Wilson won a $15,000 scholarship from an endowment established at RIT by Tiffany & Co. Foundation.

“It’s gratifying to be recognized for my work,” says Wilson. “When I came to RIT, I found my passion working with metals. There is a lot of humanism in my sculpture. I’m taking my own emotional outlook on my life and transferring that into my art.”

Wilson, who transferred to RIT from the University of New Hampshire as a biology major, aspires to run his own studio someday.

It’s that hunger that has led to accolades for Gail Fredell ’80 (MFA). Fredell and one of her classmates, Wendy Maruyama, were the first two women in the country to earn MFAs in woodworking.

“It’s not that women weren’t already making furniture and taking classes, it’s just that Wendy and I happened to be at RIT at the right time when the university started giving master of fine arts degrees in woodworking,” says Fredell.

Fredell attended U.C. Berkeley for architecture as an undergraduate. Before coming to RIT, she worked in residential remodel design and construction, becoming a licensed general contractor along the way.

“I always encourage undergraduate students to work in their field of interest during summer breaks and following graduation and to learn from the mistakes and wisdom of seasoned makers. If, after that, they still think this is the career for them, then graduate school can be very beneficial to furthering one’s knowledge, skills and aesthetic voice. I have boundless gratitude for the graduate study opportunity I had at RIT. I was very fortunate.”

Fredell’s career has included teaching at the California College of Arts and Rhode Island School of Design and at workshop programs nationwide. She was director of the furniture program at Anderson Ranch Arts Center in Snowmass Village, Colo., from 1993 through 2001. She now lives in Asheville, N.C., and maintains her furniture studio business and works as director of programs and development for the Furniture Society.

Her work is in the permanent collections of the San Francisco Museum of Modern Art and the Oakland Museum. Fredell’s major commissions have included benches for the AIDS Memorial Grove in Golden Gate Park and 110 chairs and an altar for Stanford University Memorial Chapel.

“Furniture making can be a difficult career path,” she says, “but the challenges are matched by the ever-present opportunities for personal growth, artistic expression and membership in a great community of generous and creative people.”