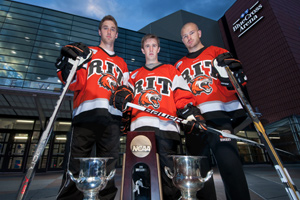 The sea of orange that invades Blue Cross Arena Oct. 16 will have a black tint.

The RIT men’s hockey team will open the home portion of its schedule when it takes on University of Massachusetts Lowell at 7:05 p.m. It’ll be the first time the Tigers take the ice in Rochester since their magical NCAA Frozen Four run began by winning the Atlantic Hockey Association Tournament on that same Blue Cross Arena ice last March.

But this contest is about more than hockey. The Tigers will be wearing special edition black jerseys and auctioning them off to raise money to support former Rochester Americans star Craig Charron’s battle against cancer.

“Rochester is a tight hockey community and when we saw someone like Craig—who has contributed so much to the community and to hockey in Rochester—needed help, we wanted to step up and help he and his family in his difficult fight against cancer,” says RIT Head Coach Wayne Wilson.

What: RIT vs. University of Massachusetts Lowell
When: Saturday, October 16, 7:05
Where: Blue Cross Arena (www.bluecrossarena.com/)

Ticket Info:
$12 for adults
$10 for faculty/staff/alumni
$9 for students at the door
$6 On-campus Advanced Purchase

Fans: RIT players will be wearing special edition black jerseys that will be auctioned off to benefit Craig Charron’s fight against cancer. Visit www.rit.edu/charron to bid. Tigers fans are encouraged to wear orange to the game.

The auction for the game-worn jerseys begins at 12 p.m. Thursday and ends at 5 p.m. Sunday. Fans can bid by visiting www.rit.edu/charron.

The black jersey auction is only one of many special plans for the game, which serves as the featured event of RIT’s Brick City Homecoming and Family Weekend. Before the Tigers take the ice, a special highlight video will commemorate their 2009-2010 season. Also, former NHL coach and ESPN hockey analyst Barry Melrose will make an appearance. Melrose, who was part of ESPN’s broadcast team in each of RIT’s NCAA Tournament appearances, will join Charron and RIT President Bill Destler for a ceremonial puck drop before the game.

It’s the second time the Tigers will play downtown during their homecoming weekend. Last year RIT took on Colgate in front of 7,421 fans.

“We’re very excited to be playing downtown during Brick City Weekend,” Wilson says. “Last year was great, playing in front of such a large crowd with a great atmosphere. We hope to see this event continue to grow and maybe play in front of a sellout crowd—setting a new RIT attendance record in Rochester.”

In a preseason poll, the Atlantic Hockey Association ranked RIT #1 for the 2010-11 Season:
http://www.atlantichockeyonline.com/news/2010-11_News/preseasonpoll092110