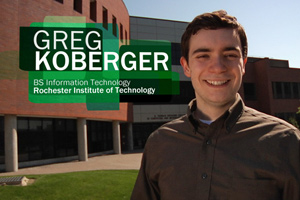 Best of Both Worlds

There’s no rest when a passionate idea springs forward. While Greg Koberger ’10 has mastered social media, he’s also flexing his entrepreneurial muscle with his classmate and business partner Ian Mikutel ’10.

After receiving their information technology degrees in May, Koberger and Mikutel—who started work this past September at Mozilla and Microsoft, respectively—might have been tempted to spend last summer kicking back knowing that enviable jobs were waiting for them come fall.

But instead of relaxing they have been focusing on their own company, 10 Tangent Labs, which will function as an umbrella for the development of business ideas.

“We have four or five strong startup ideas, all Internet-based,” says Mikutel.

One possibility is Intersect, which won a top prize in the Alumni Association Board of Directors Innovation and Creativity competition at the 2010 Imagine RIT festival. Intersect is a tool that allows students to search for interesting and relevant college courses online, making the process of registering for courses more efficient and rewarding. Koberger started working on the idea nearly two years ago. They hope Intersect could someday be used by colleges anywhere.

Neither Koberger or Mikutel are strangers to launching entrepreneurial endeavors. Mikutel was in high school when he launched his first online venture—TheWiire.com, a website devoted to Nintendo Wii—in 2005, a year before the product came out. TheWiire.com features news, product reviews, and podcasts. About 7,000 people all over the world tune in to listen to his updates, which include interviews with key industry figures. The site makes enough money through advertising to cover expenses, and Mikutel has a small volunteer staff including two programmers from Canada, a graphic designer from Washington state, and an editor from Milwaukee. Mikutel and Koberger are also the brains behind RIT48, an entrepreneurial boot camp that challenges student teams to pitch, plan, develop, and launch a Web startup in a weekend. RIT48 began in the spring and was an immediate success. The event will become an annual competition for students at RIT.

“Being an entrepreneur is not for everybody,” Mikutel says. “I think it boils down to how much risk and uncertainty can you stomach. You have to get used to the idea of going against the grain. You have to be able to take criticism, you have to be willing to change when things don’t work out as you expected.”

While Mikutel and Koberger will be working in different states, they will continue to collaborate on the side to further develop Intersect while they identify exciting opportunities for 10 Tangent Labs.

“I’m looking forward to working at Mozilla,” says Koberger. “But I also like working for myself. I'm excited about seeing what we can do.”

For Further Reading:
This profile of Greg Koberger and Ian Mikutel is an excerpt of a longer feature story on entrepreneurship at RIT. Read the story in its entirety here:
http://www.rit.edu/news/umag/fall2010/18_Off_and_Running.php