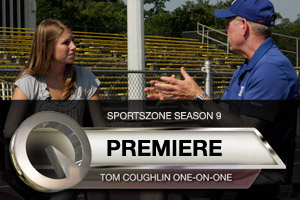 SportsZone’s premiere episode features a one-on-one conversation with current New York Giants and former RIT Football Coach, Tom Coughlin. Forty years after setting foot in the Brick City, Coughlin sits down with SportsZone’s Shelby Hill and looks back on his time with the Tigers and shares one of his biggest disappointments.

Also, after an unforgettable run to the Frozen Four, Wayne Wilson and the Tigers discuss expectations of a new season and former goaltender Jared DeMichiel gets his shot at the pros.