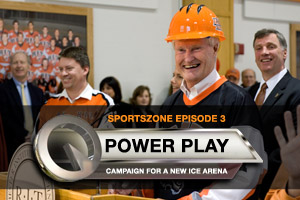 In October RIT dropped the puck on a $15 million campaign to build a new on-campus ice hockey arena. SportsZone’s Shelby Hill talks about the effort in Episode 3 of RIT SportsZone with President William Destler, Men’s Hockey Head Coach Wayne Wilson, and alumnus Steve Schultz, who kick started the cause with a $1 million donation.

Also, four years after arriving on campus, one of the most decorated recruiting classes in Women’s Hockey history sits down with SZ’s Alison Dupra to talk about their accomplishments and what they hope to achieve in their final season at RIT.