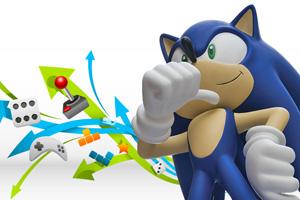 Ned Blakley and Matt Fico have spent the bulk of the past five months in a room filled with arcade games—and they didn't even need any tokens.

Blakley and Fico joined a team at The Strong in Rochester, to help develop a new exhibit at the institution's National Museum of Play. The interactive exhibit, eGameRevolution, which opened Nov. 20, chronicles the history of video games.

The two students, enrolled in the B. Thomas Golisano College of Computing and Information Sciences, spent countless hours playing many of the same games that consumed their time as children. But this time they weren't playing for fun or even for bragging rights. Instead, they sought to chronicle their passion and, in the process, advance a profession.

"In order to be a successful game designer, you need to know what worked in the past and what failed," says Fico, a third-year game design and development major. "We're archiving video games, preserving them and making them artifacts. This allows designers to have a better understanding of what works."

The opportunity to record and archive these games for The Strong's International Center for the History of Electronic Games is one both students relish. 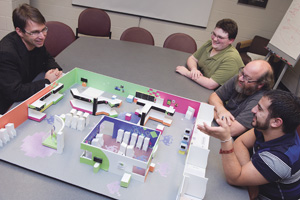 "It has been a way to combine what I'm doing in school with what I enjoy doing," says Blakley, a third-year new media interactive development major.

As their co-ops progressed, Blakley and Fico expanded their roles. J.P. Dyson, the director of the center, sought their help to make eGameRevolution come alive.

"There is just so much important work to do—more than we can do as a staff," Dyson says. "The RIT students played such an important role in both the preservation of electronic games and the exhibit."

There is a strong connection between RIT and The Strong. Golisano College Dean Jorge Díaz-Herrera sits on the museum's board of trustees, opening the door for collaboration. Dyson has reached out to Andy Phelps, chair of RIT's Department of Interactive Games and Media, for help with various preservation techniques. And this summer, the center named Stephen Jacobs, associate professor of interactive games and media, a visiting scholar.

"The relationship is a natural fit," says Jacobs, who worked with the center's staff and the two students to make eGameRevolution a reality. "We're able to collaborate and share our mutual expertise in the area of electronic games. Plus, it has provided tremendous opportunities for our students and faculty."

It has been an opportunity that Blakley and Fico will never forget. Each was able to use his individual skill-sets to contribute to the exhibit.

Blakley produced two videos. The first is a short compilation of the 24 games that, in Blakley's opinion, have been the most important in history. 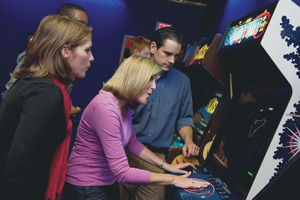 What: An interactive exhibit on the history of electronic games.

Where: National Museum of Play at The Strong 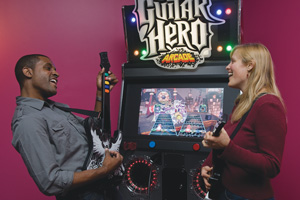 "There are definitely some 'Ned favorites' in there," he says with a smile.

The second is a 30-minute montage of video game references in popular culture. Both videos run on a loop in the exhibit.

Fico created a flash game called "Name That Tune." Visitors hear snippets of popular video game music and guess what games they were heard in.

"We each have our own projects to point to and say, 'That is what we toiled over during our co-op. We weren't just playing video games,'" Fico says.

"I'm nervous, but I'm also excited. You know you're doing well when people who are so experienced say you're doing a great job."

Blakley feels similarly, saying his friends and family can't wait to come see what he's been up to. He still can't believe he was able to play such an important role in such a large exhibit.

"It hasn't quite sunk in yet, but I know that when I leave here I'll be leaving a bit of my legacy behind," he says. "This is a permanent exhibit that will continue long after I leave. Just thinking about that makes me really happy."

For More Information:
Get a behind-the-scenes look at eGameRevolution from J.P. Dyson, director of The Strong's International Center for the History of Electronic Games: http://www.youtube.com/watch?v=Gf38PngS1rM