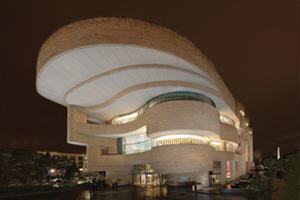 Families, friends and strangers united on the National Mall in Washington, D.C., on Saturday, September 26, to create RIT’s 25th Big Shot photograph. Beginning in 1987, the project has drawn hundreds of volunteers to locations around the world in support of the annual photography project.

The Smithsonian’s National Museum of the American Indian, which opened five years ago this month, is the subject of this year’s nighttime image. With the Washington Monument looming in the background, RIT photographers perched themselves on 15-foot high scaffolding to capture the landscape of our nation’s capital.

Despite the evening’s rainy conditions, the event drew more than 800 volunteers. Families from the Washington, D.C., area joined museum members and a contingent of RIT students, faculty and alumni. The making of the Big Shot photograph requires volunteers, using only flashlights and camera flash units, to provide the image’s primary light source. It is often described as a “painting with light” photograph, because while RIT photographers shoot an extended exposure of 20 seconds, volunteers continuously paint the subject area.

Volunteers broke into lighting teams with each team assigned a specific area of the landmark to illuminate. For this year’s image, 11 lighting teams were needed. In addition, eight volunteers from RIT and the museum served as models, taking position in the foreground to offer the photo a sense of scale.

Among the event’s rookie volunteers were RIT President Bill Destler and his wife, Rebecca Johnson.

“We were excited to be a part of this rich RIT tradition and see so many members of the RIT campus take part including our RIT alumni who traveled here from all over the country,” says Destler. “We are proud to be sharing our 25th Big Shot with this national landmark that is a cultural embassy to Native Americans everywhere.”

The RIT Big Shot event is part of the museum’s fall celebrations for its fifth anniversary.

“In spite of the rain, families, friends of the museum and RIT alumni showed up with flashlights in hand,” says Kevin Gover (Pawnee/Comanche), director of the Smithsonian’s National Museum of the American Indian. “We are so proud to be part of RIT’s Big Shot.”

Each year, RIT’s Big Shot project draws thousands of volunteers and spectators. Past Big Shot photos have captured national and international landmarks including the U.S.S. Intrepid, the Royal Palace in Stockholm, Sweden, and George Eastman House International Museum of Photography and Film. To view all past 25 Big Shot photographs, visit www.rit.edu/bigshot.