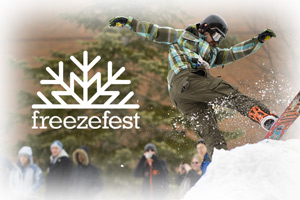 Freeze Fest brings students, members of the RIT community, family and friends out into the elements for a variety of frosty and fantastic events in February. As Rochester gets its fair share of snow, RIT responds by shaking up the winter doldrums and hosting unique experiences. This includes an outdoor snowboarding competition, Gospel ensemble performance, a snow-sculpting competition, carriage rides, a chili cook-off, and a Super Bowl party in the Gordon Field House and Activities Center.

The weekend featured comedian Aziz Ansari, best known for his role on the NBC sitcom “Parks and Recreation.” Students also rallied around the men’s hockey team for a pep rally and bonfire as the Tigers squared off against Atlantic Hockey Association rival, Air Force. (RIT won the first game, and tied in the second game en route to their fourth league championship in five years).

See more about Freeze Fest and its activities at: http://campuslife.rit.edu/freezefest/