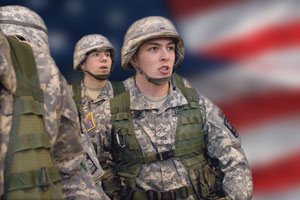 Running two miles at 6:30 a.m. on a rainy November day isn’t usually on the “to-do” list of most college students. But for Air Force Cadet Christopher Steenson, sprints and pushups at dawn are not only on his to-do list—they’re positioned at the top.

Steenson, a fifth-year safety technology major from Hilton, is just one of 170 RIT students who have committed to serving their country as dedicated members of the Reserve Officers’ Training Corps, or ROTC. For him, the decision to join ranks was a virtual no-brainer.

“My dad is an Army Reserve chaplain and I have always been positively influenced by what he did as a soldier, minister and counselor,” he says. “From my childhood, I just knew that I was destined to serve in the military. It was part of my upbringing—our lifestyle. My family would go to Christmas parties at my father’s military unit and Santa always wore combat boots—and that was normal.”

When the time came for Steenson to decide whether to enlist in the military right out of high school or attend college, he found a way to do both. 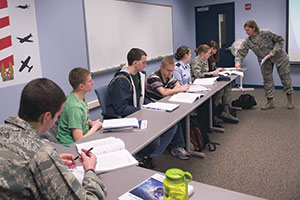 As part of their military instruction, Air Force cadets must participate in classroom instruction in addition to their regular RIT coursework. 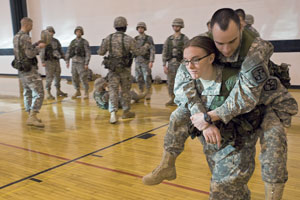 Army Cadet Kathleen Minor carries a “wounded” soldier on her back during first-aid exercises.

“My dream has always been to fly,” he says. “At the same time, I also knew that I wanted a unique college experience. It was important for me to get a college education and graduate as a commissioned military officer. RIT was the right place for me to accomplish all of that.”

Education and training play a major role in the life of college ROTC cadets. On top of a full course-load of RIT classes, cadets in both the Air Force and Army programs are required to participate in physical training as well as attend ROTC classes varying anywhere from presentation skills to military history to first aid and prisoner-of-war survival tactics. Upon graduation, Air Force ROTC cadets are commissioned by the U.S. president as second lieutenants in the Air Force and serve four years on active duty. Cadets graduating from Army ROTC programs are required to serve eight years in the military.

Despite the fact that the United States has been steadily involved in conflicts throughout the world, ROTC programs across the country remain a popular choice for students.

“Today’s young people have many concerns about the stability of the economy and finding a good job after graduation,” says Lt. Col. Mark Avery, commander of RIT’s Air Force Detachment 538. “Air Force ROTC detachments across the country are experiencing a period of record enrollment. There will always be jobs for graduates entering the military, but, more importantly, our cadets are excited to serve their country. This is something bigger than themselves and this is where their hearts are.”

While the military may not be a lifelong career choice for all cadets, there is a certain validation to having a college degree that will be useful after service in the military is over. RIT’s ROTC programs have cadets who are enrolled in just about every program that RIT offers.

“I have taken coursework in industrial hygiene, emergency response and risk management that will undoubtedly help me become a better airman,” says Steenson. “My military training at RIT will help me make better operational decisions, and as an officer, I will be expected to lead my men and women into the unknown. My training and education have pushed me to want to be the best.” 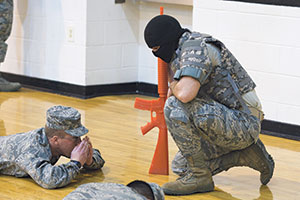 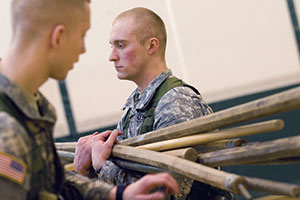 Army cadets learn to make splints for broken arms and legs during a first-aid training class. 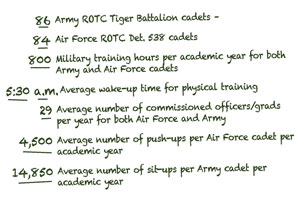 And, sending top-notch graduates into service is just one of the program’s selling points. Lt. Kathryn Miles, a 2007 graduate of RIT’s Air Force ROTC program, was recently presented with the Lance P. Sijan Leadership Award, the highest leadership citation offered by the U.S. Air Force.

Maj. Maurice Connelly, a former ROTC cadet and executive officer of RIT’s Army Tiger Battalion, knows what it takes to be a successful cadet.

“Dedication is the biggest piece of the puzzle,” he says. “We’re looking for students who are inquisitive, motivated, have integrity and are willing to lead. We need students who are careful planners, writers. When we find these students, our instructors guide them in the right direction and provide support as they balance their RIT academics with the rigors of military training. The foundation is here at RIT and we are preparing them for their careers in the military.”

Fourth-year criminal justice student Kathleen Minor came to RIT out of high school because the Army recruiter in her hometown of Penn Yan told her that RIT is the best school in the region offering an Army ROTC program. Both of Minor’s parents are Marines and her brother is in the Army Reserves.

“Although there are only 10 women in our Army program, this is a point of pride for me,” she says. “We are a family here—and I feel like one of the guys, which is OK. We spend upwards of 40 hours a week together, studying, training. We’ve come to rely on each other and we all have the same goal—to be physically, mentally and emotionally prepared to serve our country. We all want to do something meaningful with our lives.”

Steenson’s dream of flying will come true after he graduates this May. This summer he heads to Laughlin Air Force Base in Del Rio, Texas, to begin pilot training. He’s certain that one day he will be deployed overseas to help defend his country.

“I’m excited to begin this next phase of my life,” he says. “My father was deployed to Iraq at one time and I’m confident that my education and training will guide me too. We are a country at war and that can seem daunting, but this is the career that I have chosen for myself—and I’m ready.”

For More Information:
Get a behind-the-scenes look at the ROTC programs on campus: www.youtube.com/watch?v=gIhAS_8j1Xo