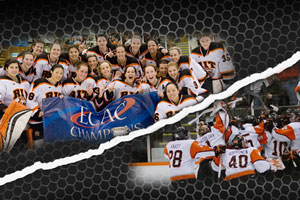 Both the men’s and women’s hockey teams are playing for championships this weekend and one thing is for certain: Ritchie the mascot and the Corner Crew will be working overtime.

For the first time in history, an RIT women’s ice hockey team will compete in the championship round. The 2011 NCAA Division III Women’s Ice Hockey Championships will be played on Friday and Saturday, March 18th and 19th. The Tigers face Middlebury College at 7:00 p.m. Friday at RIT’s Ritter Ice Arena. That game will be preceded by the other semi-final contest at 3:30 PM (Gustavus Adolphus College vs. Norwich University). The winners of each game will face one another Saturday at 7:00 p.m. for the national title.

“Please join me in congratulating these two fine teams,” says RIT President Bill Destler. “We are extremely proud of their accomplishments. Furthermore, I see this as an opportunity to show our true Tiger Spirit by attending each game to show our support for our student-athletes. This is a once in a lifetime opportunity. Let’s all show them how much we appreciate their efforts and accomplishments.”

Tickets are available through the RIT Gordon Field House Box Office for both events as well as at the ticket window in Ritter Arena for the women's games and at the Blue Cross Arena Box Office for the men's games.