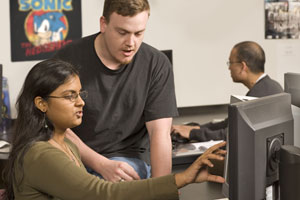 Rochester Institute of Technology’s game design and development program is among the most elite gaming programs in the country, according to new national rankings from The Princeton Review.

One of the nation’s best known education services companies, The Princeton Review teamed up with GamePro Media to produce the second annual “Top Schools for Video Game Design Study for 2011.”

The program, housed in the Department of Interactive Games and Media within the B. Thomas Golisano College of Computing and Information Sciences, was ranked fourth at the graduate level and ninth at the undergraduate level.

“We’ve always felt very strongly that what we’re doing is the right academic path for who we are and what we feel we need to be teaching our students,” says Andrew Phelps, chair of the Department of Interactive Games and Media. “But it’s certainly nice to have an outside group appreciate what we’re doing.”

Students who pursue RIT’s master’s degree in game design and development take a series of courses in such areas as emerging technologies, electronic entertainment and history of games. Students select a sequence of core courses in game engine development or artificial intelligence, followed by courses in human-computer interaction, database architecture and design, content authoring for games or asset creation and management. The degree culminates with a capstone project in which students create their own games.

Alumni of both the undergraduate and graduate programs are employed at gaming industry leaders such as Microsoft Games Studio, Sony Computer Entertainment of America, Electronic Arts and Valve.

The list will be published in the April edition of GamePro magazine, which hit newsstands March 8.