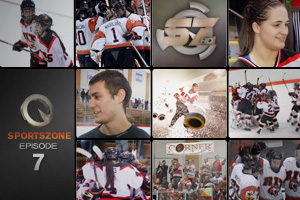 Episode 7 of RIT SportsZone follows the RIT Women’s Hockey team on the road to the NCAA Division 3 Frozen Four. SZ’s John DiTullio and Kristen Klock bring you highlights and reaction as the Tigers capture the ECAC West Championship and an automatic bid to the NCAA Tournament.

Plus, SportsZone is there as the Men’s Hockey team begins defense of its Atlantic Hockey Association title against American International.