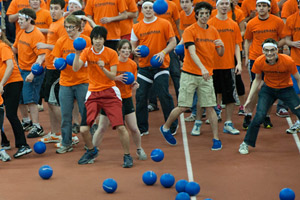 RIT and the Rochester community competed in the world’s largest dodgeball game May 1, working to set a Guinness World Record. RIT unofficially broke the world record with 2,136 participants, beating the previous record of 2,012, set by the University of Alberta, Canada earlier this year.

RIT’s Dodgeball Club, in conjunction with the university’s Phi Kappa Psi fraternity, held the event after months of planning and preparation. Thousands of world record hopefuls filled the Gordon Field House floor Sunday, along with over 500 dodgeballs, 50 official witnesses and hundreds of onlookers.

“I have been excited for months to see this all come together. The excitement of the RIT and Rochester community has been a totally surreal and unique experience,” says Ross Kahn, a Phi Kappa Psi organizer for the event.

Players were separated into two teams, orange and brown, RIT’s school colors, all receiving a free headband and T-shirt for their corresponding team. After words of encouragement from several RIT community members and an explanation of the rules, the game kicked off.

As numbers on each team slowly dwindled, organizers imposed several lines and rule changes to speed up the game. After about an hour of play, the orange team came out with the win. Players were allowed to keep the dodgeballs and celebrated at an after-party on campus.

Organizers have sent documentation and video of the event to the Guinness Book of World Records, in hopes to be declared official sometime this month.

“It would be amazing for RIT to be in the Guinness Book,” says Michael Piggott, RIT Dodgeball Club President. “I don't know if we have ever broken a record before, but it is a great way for all of us to give back to RIT.”