Clifford McCormick Ulp (1885-1958) was born in Olean, New York, August 23, 1885. He died in Rochester, New York, on January 22, 1958. He attended East High School and following his graduation from the Rochester Institute of Technology in 1908, spent a year of study at the Art Students League in New York City, on scholarship with William Merritt Chase and F. Walter Taylor. As a graduate of the Institute, he was instrumental in the founding of the R.I.T. Alumni Association and served as its first president. For several years he was a student of Charles H. Woodbury during the summer session at Ogunquit, Maine and of Emile Gruppe at Gloucester, Massachusetts.

He joined the staff of Rochester Institute of Technology in 1913, was made director of the School of Applied Arts in 1921, and served this institution faithfully until his retirement in May of 1952. During his 39 years of service at the Institute he gained renown as an art educator, introducing many innovations in art instruction. He played a vital role in the shaping of the lives of countless numbers of day and evening students who knew and loved him as an artist, administrator, teacher, and friend.

Clifford M. Ulp, died at the young age of 72, on Jan. 22, 1958 after he had collapsed on the sidewalk against the side of a building at Rochester Institute of Technology where he had taught for 39 years. He died on the very foundation of the school that had brought life to his ideas and innovations. He died leaving his legacy of profound talent and innovative teaching methods in those hallowed halls.

Known nationally as an innovative professor of art, Ulp introduced the use of motion picture episodes in a course on drawing and sketching designated as Models in Mo­tion. He developed the Rochester Art Scale, a method of evaluation of art competence. He was enthusiastic about bringing nature and pictorial motifs indoors by the projection of color slides. An article by Mr. Ulp reviewing this, appeared in the American Artist, 1942, entitled, “A New Leaf in the Artist’s Sketch Book.”

Ulp was a revered teacher and mentor of Carl Peters who has become well-known and much sought after artist. Ulp had been teaching at the Mechanics Institute for very short of time when Carl began studying under him, but already Ulp’s reputation as a diverse tal­ent was evident because he taught illustration, composition, lettering, and perspective, and also because his skill in mural painting was being demonstrated as he worked on The Worship of the Magi, a major figurative painting for the altar of St. Monica’s church.

A religious man devoted to Christian Science, Ulp was dignified as a teacher. He owned the enviable reputation of being willing to share. ‘Time, information, help, any­thing he had to give to anyone sincerely interested in art, he gave.’38 Carrying on nine­teenth-century traditions, Ulp was also a strong advocate of the pursuit of morals and eth­ics in art. (See Carl W. Peters: American Scene Painter from Rochester to Rockport By Richard H. Love)

He was a consultant on various civic art projects and participated in many national art education activities. He was instructor of drawing and painting at Chautauqua Sum­mer School in 1920. In addition to his duties at the Institute he specialized in landscape painting. Many of his paintings are owned by private individuals in Rochester and various other cities.

Mr. Ulp was a Fellow of the Rochester Museum of Arts and Sciences, a member of the Genesee Group, the Rochester Art Club where he held the post of president from 1926-1932, and an honorary member of the Kodak Camera Club. He served on the Board of Managers of the Memorial Art Gallery.

An artist of national fame, his work received a widespread recognition. His painting of British General Lord Allenby’s entrance into Damascus hung in the National Gallery in Washington, D.C. Locally his work is exhibited at the Margaret Woodbury Strong Museum, Rochester Institute of Technology, Eastman Dental Dispensary and St. Monica’s Church. As an illustrator, he was represented in such well-known periodicals as “The Saturday Eve­ning Post” and “Country Gentlemen.” His paintings and drawings earned him many prize awards.

An active participant in community affairs, he was president of the Rochester Art Club from 1926 to 1932 and served as president from 1927-1943, member Board of Man­agers, Memorial Art Gallery 1923-1952, a member of the Christian Science Church, and the Rochester Ad Club. He illustrated the cover of the Book of the Rochester Centennial—A Century on Parade showing that he was highly regarded as an artist of local acclaim. He has won various prizes for his paintings and drawings in local exhibitions, among which was First Prize for his entry in the first Picturesque Rochester Competition in 1910. 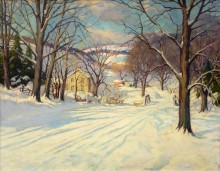 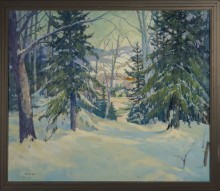 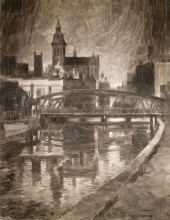 Plymouth Avenue: Bridge in the Days of the Erie Canal 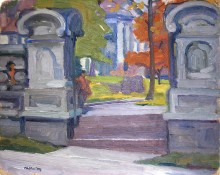 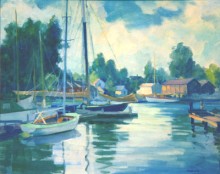 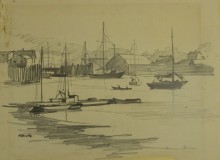