David Call, a Deaf artist, was born in Los Angeles, California around the 1960s. His parents and oldest brother were hearing while his middle brother and him were Deaf. David attended the Hearing Institute in Los Angeles for speech training at an early age but did not benefit from his experience there. He attended the California School for the Deaf and later on Gallaudet University, where he met his wife, Debbie, and graduated with a BA in public education and history. David earned his MA degree in special education from the California State University and is currently pursuing his teaching career in art at the California School for the Deaf.

From a young age, David had a love for art because it was a medium that helped him communicate with his parents during a time when sign language wasn’t introduced in his life yet. During his time in public school in Southern California, David was placed in a class for the Deaf and was discouraged from using gestures to communicate. He was often isolated from other hearing students and made fun of because he was Deaf. These experiences caused him to get into trouble in two public schools until his mother decided to acquaint David with sign language.

David learned to sign in Signing Exact English (SEE) and later on American Sign Language (ASL) which helped him ease into the Deaf community and identity. After he took a visual arts class, David was motivated to explore different mediums and was fascinated with art literature and art history. He taught social studies for 18 years before replacing an art teacher and teaching Deaf-centered visual arts. The Deaf View/Image Art movement, also known as, the De’VIA Art movement was a topic that David focused on and he, himself, became a part of this movement.

Block cut prints, ink drawings, and linocut prints were the main mediums David worked with in his exploration of the Deaf experience. He originally sold his De’Via art pieces to raise money for his classroom art supplies and ended up creating his own online art business for his work. David continues his artistic path and hopes to inspire his own Deaf students to find their own identity through this form of expression.
Source:
https://deaf-art.org/profiles/david-call/ 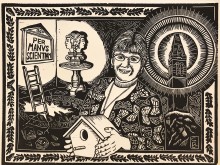 The Beacon of Hope 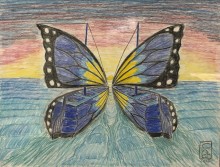 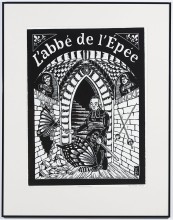