Harvey Caplin (1914-1984) lived with his family in Rochester, New York, in the early 40s. He attended Rochester Institute of Technology and majored in photography. In 1942, he enlisted in the military and was sent to New Mexico as a damage photographer. It was when Caplin was on leave or had spare time that he began his vast library of images of the Southwest.

Many of his photos were taken on the Bell Ranch, a one-million acre ranch in Tucumcari, NM. Caplin actually worked on the ranch. He shot right alongside the cowboys, often from the back of a horse. These are authentic depictions of life on a working ranch. It was not easy to use a 1940s Speed Graphic 4x5 camera back when "automatic" settings were non-existent, but it was second nature to Caplin.

In the late 40s and 50s, he began shooting photos of Native Americans in the New Mexico area. Commissioned by the Bureau of Indian Affairs to capture and preserve the Indian way of life, Caplin shot photos of the Pueblo, Navajo and Zuni Indians. From Ceremonial Apache Dancers in Gallup to Maria Martinez, the now world famous San Ildefonso potter, Caplin covered a wide variety of Native American lifestyles. Caplin also excelled in landscape shots of the Four Corners Region — Utah, Arizona, Colorado, and New Mexico. His photos graced the cover of Life Magazine, Smithsonian, and Look- to name a few. The Saturday Evening Post hired him for a landscape series, which gave way to River of Aspens. Caplin continued to capture images until 1984. Along with his legacy of photos, he left behind complete catalogs of every one of his 55,000 shots. 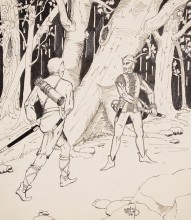