Harvey Ellis (1852-1904) was a Rochester, NY born architect, one of the notable architectural renderers of his time, and artist who studied painting under Edwin White. Ellis established an architectural practice with his younger brother, Charles, in Rochester in 1879. From 1886 to 1893 he worked for several firms: Charles Mould and then J. Walter Stevens in St. Paul, Minn.; Leroy Sunderland Buffington and then Orff and Orff in Minneapolis, Minn.; Eckel and Mann in St. Joseph, Mo.; and George Mann and Randall, Ellis, and Baker in St. Louis, Mo. During those years his published renderings of Richardsonian Romanesque and Chateauesque architectural designs were imitated by numerous other American architects and renderers. Many of his architectural drawings are in the Leroy Buffington Collection at the University of Minnesota.

Ellis was best known for his mytho-landscape genre pieces and figure paintings, working in various mediums. He is one of the founders of the Rochester Art Club. His paintings were exhibited at venues including the New York Water Color Club and the Paris Exposition of 1900.

Ellis became deeply involved in the American Arts and Crafts movement. He served as President of the Rochester Society of Arts and Crafts. He spent the last months of his life in Syracuse, N.Y., working as an architect for Gustav Stickley. He contributed several architectural designs published in 1903 in The Craftsman, Stickley’s monthly magazine. 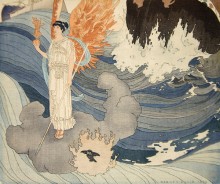 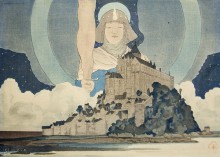