Maurice Denis (1870 -1943) received a classical education in the Lycee Condorcet where he met Vuillard, Roussel and Lugne-Poe. While studying in the Lycee he took drawing lessons and copied paintings by the old masters. In 1888 he enrolled at the Academie Julian and then at the Ecole des Beaux-Arts. In the same year Paul Serusier showed his friends at the Academie Julian the famous landscape, which he had painted at the suggestion of Gauguin at Pont-Aven and which, for this reason, was considered a "talisman" of Gauguin's doctrine of Synthetism. This was a decisive revelation for Denis who found himself attracted by the new idea of Synthetism and by Gauguin's paintings, which he first saw at the exhibition of the Impressionist and Synthetist Group at the Cafe Volpini in 188Denis joined the Nabis (a Hebrew word meaning 'prophets') and in 1890, in the review Art et Critique, he published his famous article in which he stated the artistic credo of the group. During this period he became associated with the Symbolist writers, illustrating the books of Andre Gide and Paul Verlaine's Sagesse, and designing front-pieces for Maurice Maeterlinck's Pelleas et Melisande and for musical scores of Claude DebussLike the other Nabis, Denis experimented in various fields of art, designing carpets, painting cartoons for stained-glass and mosaic panels, and decorating ceramics. The 1890s saw his first large-scale decorative works, the painted ceiling in the house of the French composer Chausson (1894) and a cycle of panels on the theme The Legend of St. Hubert (1897) in the house of the collector CochiHis early work as a painter is marked by originality, though he was strongly influenced by the art of the Italian Renaissance, especially after his trips to Tuscany and Umbria in 1895 and 1897. Though his paintings and mural decorations of subsequent years can now seem rather anaemic and sugary, his fame continued to grow. He received numerous commissions: from 1899 to 1903 he decorated the Church of Sainte-Croix at VÃ©sinet; in 1908 he produced his Eternal Spring for Thomas; and in 1908-9 he was commissioned by Ivan Morozov, Russian industrialist and famous patron of art, to make a series of decorative panels, The Story of Psyche, which he brought to Moscow in January 1909 to install in Morozov's housIn 1913, Denis did ceiling paintings for the Theatre des Champs-Elysees; in 1917, he worked in the Church of St. Paul at Geneva; in 1924, he decorated the dome of the Petit Palais in Paris; and in 1928, he painted the ceiling above the staircase in the Senate building. Between 1936 and 1939, he did a number of decorative panels for the Palais des Nations in GenevIn addition to his work as a painter, Denis was one of the most prominent art theoreticians of the time. His articles on contemporary art, published in various magazines, were later collected in Theories (1912) and Nouvelles theories (1922)http://www.abcgallery.com/D/denis/denisbio.html 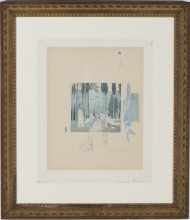