Milton E. Bond (1891-1970) was born and raised in Rochester, NY, the son of Howard and Sophie J. (Calhoun) Bond. He studied at the University of Rochester (1909 – 1913), and at Mechanics Institute (now RIT), graduating in 1922. He later studied with American Marine Painter, Charles Woodbury.

He started his career at the Munsell Color Company, NYC (later Baltimore), where from 1922-1925 he worked as a color specialist. He developed a system to describe colors sci­entifically through reference to their position on the Munsell Color Scale. He then joined the faculty at MT School of Art and Design in 1926 as an instructor. He specialized in courses related to painting and design; but also taught modeling, history of art, et al.

The inspiration he got from nearby Bristol Hills and the Finger Lakes Region helped build his reputation as a painter of landscapes. In 1934 he started spending his summers at Honeoye Lake and many of his best work was done in these regions. Later he included sea­scapes to his repertoire with time spent on the Maine seacoast.

Milton Bond also had a lifelong interest in Shakespeare drama and was a prominent actor in Rochester theater. He produced, directed, designed and acted in numerous produc­tions of Shakespeare and occasionally other playwrights, including his own. He also was in­terested in Astronomy, he designed and built telescopes. He was married to Mildred Lewis Benedict who died in 1952 and then married his second wife, Alice Earls Moss.

Beginning in late 1930’s, Bond experimented with paintings of microscopic carborundum crystals reproduced on canvas, enlarged many times over as monumental architectural and geologic forms. This culminated in his production of the Kublai Khan Series. The series evolved from these crystal paintings but also incorporated his talents of depicting the human body. The series contained a multi-panel series of nudes floating in a magical crystalline land­scape. Inspired by the Samuel Taylor Col. Ridge poem, “Kublai Kahn”. The series was pro­jected as a twelve part series, nine panels were completed, one left incomplete, and included a watercolor triptych as part of series. Bond started the project in the late 1940’s and continued to work on it until (legal) blindness overtook him in the late 1960’s. For many years the series was not publicly exhibited as he had planned to introduce them at the (never achieved) comple­tion of the series. The series was given to a friend of Bonds named Charles Howe who stored them in his attic. Howe was a dear friend of Bonds and he was an illustrator, photographer and an artist. He worked at Strong Memorial Hospital where he illustrated anatomy. He shared this talent with Bond who utilized it on his inclusion of dramatically realistic and anatomically correct human forms in the Kublai Kahn series. 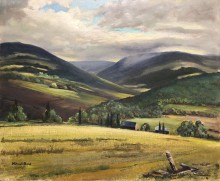 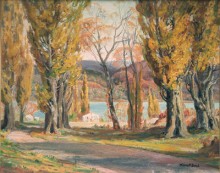