Richard Florsheim (1916-1979) was born into a wealthy family on October 25, 1916, in Chicago, Illinois. He attended the Chicago Latin School (1923–34), and the University of Chicago (1935-36), and in the interim, studied in New York with Aaron Bohrod (1934–35). His father subsidized his independent study in France, Italy, central Europe, and the Near East (1936–38). In France he met artist Emile Bernard, and spent time in his studio and visiting museums. He exhibited in France in the late 1930s with the Salon des Refusés, and the Musée du Jeu de Paume honored him by purchasing one of his paintings, Don Quixote.

He began working in lithography in 1940 and was included in a two-man show at Quest Gallery, Chicago. In 1942, Florsheim enlisted in the U.S. Navy and served in the Pacific theater as a cartographer and obtained patents for his radar plane-spotting technique. After the war, he resumed his artistic career, exhibiting widely.

Florsheim had a summer home in Provincetown, MA, and was a trustee and honorary vice president of Provincetown Art Association. In 1965 he was appointed to the Illinois State Art Council. He was also a member of the Audubon Artists and Society of American Graphic Artists. He died in 1979. 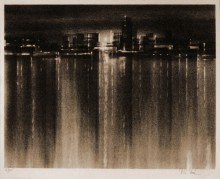