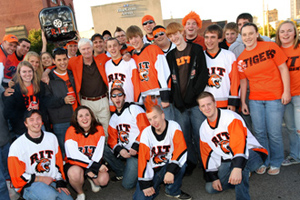 Each fall, as the leaves on campus turn bright orange, Brick City Homecoming and Family Weekend welcomes alumni and families for a fun-filled weekend. This year’s events drew nearly 15,000 alumni, parents, and friends back to campus—the biggest turn out yet for Brick City weekend.

This year, a new tradition began. RIT’s men’s Division I hockey team hosted it’s inaugural Brick City game, giving students – old and new – a chance to join a sea of orange at the game, which has been added as an annual event to the weekend’s line up of activities.

The Tigers men’s hockey team opened the 2009-10 season against Colgate University in front of a record crowd of 7,500 fans at downtown Rochester’s Blue Cross Arena.

The weekend also featured a talk by Wikipedia founder Jimmy Wales and a stand-up performance by comedian Jim Gaffigan, who is best known for his Comedy Central specials and “Hot Pocket” routine.

For more on Brick City, visit www.rit.edu/brickcity and for photo highlights of the RIT Reunion 2009, visit www.huthphoto.com/RITReunion2009/.