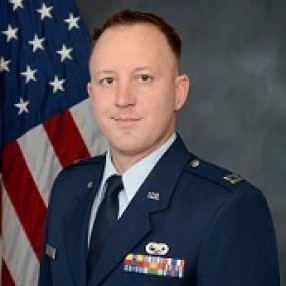 Biography
Capt Zachary Deats is the Operations Flight Commander for the Air Force ROTC Detachment 538. He is responsible for the construction, management, and execution of all unit-recruiting efforts. Additionally, he instructs cadets through a curriculum covering the Foundations of the USAF, AF History, Leadership, and National Security Affairs.

Captain Deats served in the United States Marine Corp from 2004-2009 as an Avionics Technician on 33 AV-8B aircraft. Captain Deats graduated from Rochester Institute of Technology in 2012 and Commissioned into the Air Force in 2013. Prior to his current position, Captain Deats served as an Aircraft Maintenance Officer. The captain was the Operations Officer responsible for the support and maintenance of 28 highly modified F-16/F-15 aircraft, oversaw 500+ aircraft maintainers, in a program valued at 19 Billion Dollars.