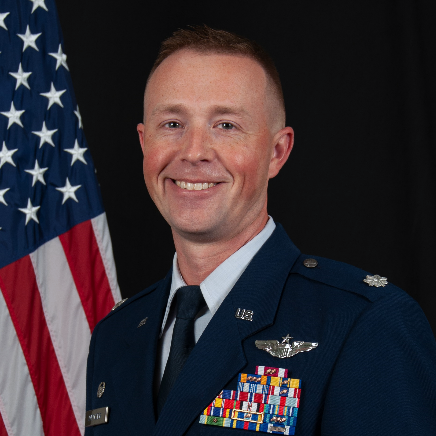 Biography
Lt Col Chris Denzer is the Commander and Professor of Aerospace Studies, Air Force Reserve Officer Training Corps Detachment 538, Rochester Institute of Technology.  He is responsible for the leadership of the detachment’s active duty cadre as well as the training and development of cadets seeking commission as second lieutenants in the United States Air and Space Forces

Lt Col Denzer commissioned in 2004 as an AFROTC Distinguished graduate from the University of Maryland, earning a degree in Aerospace Engineering with project work on tilt‑wing Unmanned Aerial Vehicles.  While completing his studies at the UMD, he served as an engineering intern with the U.S. Army Materials Systems Analysis Activity focusing on Analysis of Alternatives for the RAH-66 Comanche.  He continued his studies at North Carolina State University with studies in low speed aerodynamics and materials science earning his Masters of Science in Aerospace Engineering in 2013.

Lt Col Denzer is a Senior Pilot with more than 2000 hours and 400 combat sorties in the C-130 E/H.  He is a 2005 graduate of Joint Specialized Undergraduate Pilot Training, earning his wings at Naval Air Station Corpus Christi, Texas.  After qualifying in the C-130E he joined the 2nd Airlift Squadron at Pope AFB, North Carolina where he was trained as the Squadron’s Electronics Combat Officer.  While assigned to the 2nd, Lt Col Denzer deployed twice to the 737 EAS and 746 EAS in support of Operations ENDURING FREEDOM and IRAQI FREEDOM and served as Stage Scheduler for Operation UNIFIED RESPONSE in Haiti.  In 2010 he transferred to the 61st Airlift Squadron at Little Rock AFB, Arkansas where he rapidly upgraded, culminating as the Squadron’s Chief Evaluator Pilot.  While in the 61st he deployed three times with the 737 EAS and 774 EAS in support of Operations ENDURING FREEDOM, IRAQI FREEDOM, HORN OF AFRICA, FREEDOM SENTINEL, and NEW DAWN.  Next, Lt Col Denzer was selected to join the Air Mobility Command’s Test and Evaluation Squadron at Joint Base McGuire-Dix-Lakehurst where he again excelled and was appointed the Command’s Chief Test Director and Subject Matter Expert on Mobility Operations in a GPS degraded/denied environment.  His efforts directly contributed to being awarded AMC’s 2016 Howard W. Leaf team award.  In 2015 as a part of an Air Expeditionary Force rotation he was deployed to the 879th Expeditionary Security Forces Squadron, Riyadh Saudi Arabia in support of AFCENT as the Diplomatic Clearance Officer and Squadron Deputy Commander.  Following his deployment Lt Col Denzer was assigned to the 611th Air Operations Center at Joint Base Elmendorf Richardson, Alaska.  Supporting the North American Aerospace Defense Command he was ultimately selected as the Combat Operations Division Chief responsible to Operation NOBLE EAGLE for ensuring Air Domain Awareness and Control for the Alaskan Region.  He was an honor graduate of the Air Operations Course and the selective Command and Control Warrior Advanced Course.  As an additional duty in 2016 Lt Col Denzer was selected to serve as Executive Officer to the Secretary of the Air Force’s Science Advisory Board on Adapting Test and Evaluation to Emerging Systems.  In 2020 Lt Col Denzer was reassigned as Deputy Commander of the 36th Contingency Response Group consisting of the 554th RED HORSE Squadron, the 644th Combat Communications Squadron, the 36th Contingency Response Squadron, the 736th Security Forces Squadron, and the 36th Contingency Response Support Squadron. During this time he commanded two Contingency Response Elements, including a multi-national task force, in support of Exercises COPE NORTH and MACHETE STRIKE and was the Pacific Air Forces Subject Matter Expert on the Agile Combat Employment of Contingency Forces.