Maj. Gen. Bolden urges the 3,800 graduates to dream big and ‘Be like Rochester’

None of us knows what the future holds, which makes it all the more important to consider all possibilities—even reaching for the stars.

That was the message NASA Administrator Maj. Gen. Charles F. Bolden Jr. gave to the graduates at Rochester Institute of Technology’s 130th Academic Convocation on Friday.

Bolden, who was appointed to his post by President Barack Obama in 2009, gave the graduates three key pieces of advice: appreciate those around you who help you succeed, dream big and don’t let anyone discourage you, and “be like Rochester.” 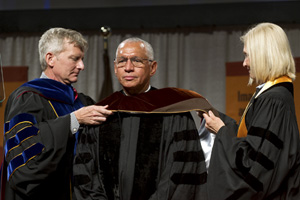 NASA Administrator Maj. Gen. Charles F. Bolden Jr. is awarded an honorary doctorate of science for his distinguished service to our country, his many accomplishments as an astronaut and administrator of NASA, and for championing the spirit of innovation, creativity and exploration. Bolden, center, is hooded by Provost Jeremy Haefner and Christine Whitman, chair-elect of the Board of Trustees.

Bolden cited the long-time ties between NASA and RIT: More than 25 RIT students have completed co-ops at NASA in the past three years, and at least 190 RIT graduates have worked for the agency.

“We collaborate on cutting-edge technologies like large format infrared detectors that can teach us more about dark matter and energy, 3D super roadmaps of planets and moons and smart dust technology that can help unlock the mysteries of the universe,” he said.

“At NASA, that’s also a big part of what we do—from greener aviation to Earth Science that looks at our planet and how our climate is changing,” Bolden said. “RIT has also affectionately been ranked—and in my book this is a tremendous badge of honor— one of the nation’s ‘nerdiest’ and ‘geekiest’ campuses. At NASA, we aspire to hold those distinctions as well.”

Bolden told students that the improving economy and continued advances in technology make this a remarkable time to launch a career.

“I call your generation the ‘space generation’ because of the expansive way you look at our world, our universe and the possibilities they contain,” he said. “You live in a world where astronauts from many nations fly together in space every single day and where we’re preparing to extend the human presence farther into the solar system. That used to be the stuff of science fiction.”

Bolden said the New Horizons spacecraft will near Pluto in a few months, and NASA has a craft that is already flying and operating outside our solar system in interstellar space.

“We’re moving beyond the limits of our own imagination,” he said. “And it’s your generation that is going to push us there. Imagine a future where human beings and robots work together to pioneer Mars and the solar system. You’re part of the generation that will travel to an asteroid that will walk the face of Mars, and yes, will return home safely. … Perhaps your own children and grandchildren will never know a time when human beings haven’t been living on Mars.

“This isn’t science fiction. It’s your generation’s future,” Bolden said. “And the task of building this future, this better society, is up to you.”

Bolden told students they are graduating at a pivotal moment in human history.

“Our planet has a very big ‘help wanted’ sign on it,” he said. “And we’re counting on your generation. We’re counting on you to cure the previously incurable, to tackle big challenges like climate change, to teach us to live as one people on this beautiful planet.”

The graduates are joining other RIT alumni “who are doing some truly remarkable things across the world,” Bolden said. “Your fellow alumni have founded companies that furthered the human spirit. They’ve written cookbooks and comic books. They are scientists, psychiatrists, photographers, professors, philosophers, designers, entrepreneurs, equestrians, MMA fighters, elected officials, teachers, service members, glass artists, parents and pillars of their communities. Just think what you’ll do!”

Bolden also told students to use their friends and family to help them achieve their goals.

“Be bold, be fearless, dream big, and by all means, don’t listen to anyone who tells you can’t do something or you don’t belong,” he said. “Don’t waste your time trying to explain yourself or your identity to anyone. Don’t feel like you have to justify why you are where you are.”

Bolden quoted Rochesterian Joseph C. Wilson, who took a chance on xerography technology that sewed the seeds for Xerox, a multi-billion corporation. Wilson recognized change will be automatic and those who welcomed new challenges would be successful.

“Class of 2015, Planet Earth is seeking just this sort of people as well,” Bolden said. “I believe you’re up to the challenge. … While no one can tell you for sure where our world is headed in the years to come, I believe that your generation will take us to a better place. A place worthy of the planet I’ve been blessed to see from space, where its serenity and lack of political borders belies the truth of what sometimes happens on the ground. May you always be willing to accept risks, try new ideas, welcome new challenges and reach for new heights.”

As part of the ceremony, RIT President Bill Destler awarded Bolden an honorary doctorate of science for his distinguished service to our country, his many accomplishments as an astronaut and administrator of NASA, and for championing the spirit of innovation, creativity and exploration.

The Gordon Field House, filled with graduates, their families and friends, faculty and staff, erupted in laughter when Destler introduced Bolden. Just as he mentioned Bolden’s distinguished military career in aviation, the crowd heard the thunderous noise of F/A-18s Blue Angels flying overhead practicing for this weekend’s airshow.

“I don’t know if you noticed, but we arranged for the Blue Angels to have a special flyover,” Destler joked.

Academic Convocation serves as RIT’s campus-wide commemoration of the conclusion to another successful academic year. During the ceremony, Destler conferred degrees on more than 3,800 undergraduate and graduate students. Diplomas are then distributed to graduates following the event at separate ceremonies held by each of RIT’s nine colleges and two academic centers.

Destler congratulated the graduates for their hard work and told them their life’s journey as an independent person has begun.

“Your future will be a good one as long as you work hard and follow your dreams,” he said voicing and using sign language.

He urged the students to follow some simple rules:

Be kind, not cruel.
Be a giver, not a taker.
Be confident, but not arrogant.
Give love, not hate.
Keep in touch with your family and friends.
Don’t be afraid of change. Change is almost always a good thing.
Make new friends inside and outside of work. You will need both.

“While all the choices we have made up until this point may have steered us in a different direction, they did not deter us from our ability to still choose who we want to be,” Carrington said. “Your profession does not define you. You can choose to be a humanitarian, to be a millionaire, to be the world’s greatest parent, to be an inventor, to be a social activist, to be happy.”

Carrington told graduates that whatever they do, they should choose to be more than mediocre.

“Do not let the fears, insecurities and beliefs of others limit what is possible for you,” she said. “You have everything you need to change the world, but you have to be willing to put in the work. Nothing worth attaining in life comes easy. It takes passion, drive and choosing to achieve greatness. … The power of choice is in our hands. It is our time to make our mark on the world.”