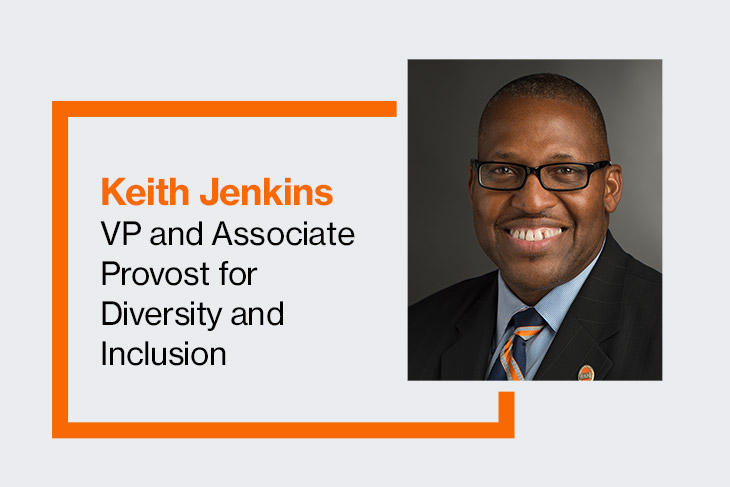 Keith Jenkins, vice president and associate provost for diversity and inclusion, provided an update to the community on Tuesday about the university’s efforts on antiracism and social justice. Jenkins said that he and university leaders spent the summer engaging with students, faculty, staff, and alumni groups—including Student Government, the ALANA Collegiate Association, Black Awareness Coordinating Committee, Global Union, Academic Senate, Staff Council, NTID Advisory Group, alumni, deans, vice presidents, and trustees—to generate a list of roughly 100 ideas of ways RIT can do more on these fronts.

“RIT was challenged to reexamine how we deliver education in the midst of a global pandemic as well as reexamine our own history and commitment deficiencies regarding Black, Indigenous, and people of color—whether regarding access and success of students, staff, and faculty or effectively creating the climate of inclusion we endeavor to establish,” said Jenkins. “RIT’s response as a university against this backdrop? Stay the course regarding actions already implemented through decades to move us forward in creating a more diverse and inclusive university and take immediate action against systemic racism and for social equity for all.”

Jenkins said the university is now prioritizing the recommendations over the next several weeks as it works to take more immediate action to move forward. He said that several of those efforts are already underway, including providing diversity and inclusion education to all first-year RIT students and later this semester installing a Frederick Douglass sculpture created by Olivia Kim to honor the 50th anniversary of BACC.

Jenkins’ remarks during the Aug. 18 President’s Address to the Community, are available online.