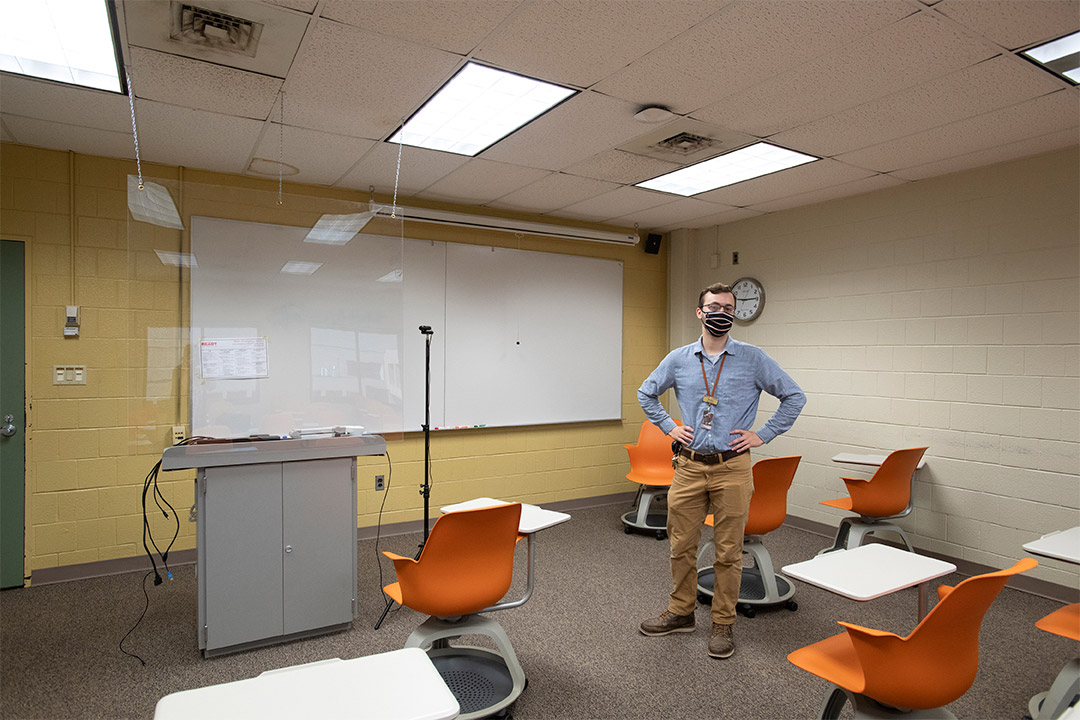 Michael Guglielmo, a fifth-year student from Henrietta, N.Y., pursuing his BS in industrial engineering and ME in industrial and systems engineering, co-oped with FMS this summer and helped on several projects to make the campus safer this fall, including deploying barriers in classrooms.

Michael Guglielmo never envisioned that he would spend a summer co-op helping his university prepare to fight off a pandemic. But the fifth-year student from Henrietta, N.Y., pursuing his BS in industrial engineering and ME in industrial and systems engineering helped put measures in place that will make everyone who sets foot on campus this fall safer.

While on co-op with RIT Facility Management Services (FMS) this summer, Guglielmo has been instrumental in several projects, including deploying barriers across campus that help prevent transmitting respiratory droplets as well as reducing touchpoints in bathrooms. Over the summer, he had to scope out nearly 1,000 spaces and 500 restrooms on campus to assess what changes needed to be made, develop prototypes, work with end users to meet their needs, supervise contractors installing products, and in some cases manufacture barriers himself.

“He has been absolutely key in the deployment of the plastic barriers we have installed in classrooms, reception areas, service desk areas and other college teaching spaces,” said Dave Harris, director of building operation and maintenance for FMS. “He’s been doing that alongside some full-time employees here and he’s more than carried his share.”

Guglielmo said that he learned a lot in this co-op and ultimately hopes to pursue a career in facilities management and planning. He said he feels glad he could contribute to making the campus safer, and that ultimately he feels the measures being put in place will make a difference.

“I’m a student and I have skin in the game because I’m going to be sitting in these classrooms in the fall,” said Guglielmo. “A lot of work has gone into making sure classrooms and everywhere on campus is as safe of an environment as we can physically provide.”