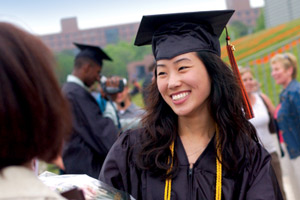 As Rochester Institute of Technology graduates gathered to celebrate their achievements, speakers at the university’s 127th commencement reminded the Class of 2012 to stay motivated—and act responsibly.

Bill Nye, well-known scientist, environmental advocate and TV personality, offered up the keynote address at Academic Convocation on May 25, which served as the kickoff to a weekend of commencement-related activities at RIT. He challenged graduates to use their intellect and passion to correct the mistakes of previous generations, particularly when it come to the issue of global warming.

“It’s the challenge for you and your classmates as you step out into this world and the workplace,” Nye said, “a set of problems like no one before you has had to face. But I think you all are up to it. I want you to—I’m not kidding—change the world.”

Nye has made it his mission to foster a scientifically literate society. By making science entertaining and accessible, he strives to help people understand and appreciate how science makes the world a better place. He first brought his crusade to the RIT campus in 2008 as a presenter for the Frank Horton Distinguished Speaker Series.

Many of today’s RIT graduates recall watching Bill Nye the Science Guy during the program’s original run on public television from 1992 to 1998, which helped their personal interest in science and technology. He encouraged graduates to share the knowledge they have obtained over the years to achieve its maximum impact.

“You are among the very best in the world at thinking about new arrangements, new tools and even, if I may, new tricks to reach for the high-hanging fruit—the big prizes and the great big prizes. That’s what we want you to do for us. Change the world in new, exciting and big ways.”

Prior to Nye’s speech, the assembly heard for RIT Student Government President Greg Pollock. A graduating advertising and public relations major from RIT’s College of Liberal Arts, Pollock served two yearlong terms as president. During that period, he frequently advised fellow students to “dream big.” Seizing on that them, Pollock implored graduates not to heed the warnings of doubters that lie in wait.

“RIT has shown us that we cannot fit in when we were meant to stand out,” he explained. “Each of us is leaving here with our degree, our bigger dream and the benefit of our expanded imagination. You define your legacy, not your doubters.”

Pollock, a native of Pittsburgh, has accepted a position in the Department of Public Affairs at Dow Chemical Co. in Midland, Mich.

Academic Convocation serves as RIT’s campus-wide commemoration of the conclusion to another successful academic year. During the ceremony, RIT President Bill Destler conferred degrees on more than 4,000 undergraduate and graduate students. Diplomas are then distributed to graduates following the event at separate ceremonies held by each of RIT’s nine colleges and two academic centers.

Watch the video stream of the 2012 RIT Academic Convocation Ceremony on the RIT Commencement site. Also, you can join the conversation on Twitter by using the #RITgrad hashtag.