Be bold and unafraid to take risks. Have confidence in yourself. And most of all, embrace the opportunities life sends your way.

Those were the messages Rochester Institute of Technology graduates, their families and friends heard from speakers at the university’s 128th convocation, the opening event of the 2013 commencement weekend.

Alex Kipman, a 2001 graduate of RIT’s Golisano College of Computing and Information Sciences – now an executive with Microsoft – delivered the keynote address. Kipman, a 2013 RIT Distinguished Alumnus, joined Microsoft shortly after graduation, and is now general manager of incubation for its Interactive Entertainment Business.

“Every single graduating student has the indelible right to make a dream into reality,” said Kipman, who was honored by the IPO Foundation as its 2012 Inventor of the Year for his work on the Kinect system for Xbox 360 and Windows PCs. Making dreams come true requires taking risks, he said, “turning a page and opening a brand-new chapter. Class of 2013, please do not fall into the trap of only committing to what's predictable.”

Kipman, the primary inventor and holder of 60 patents, said it’s all too easy to measure people only by their successes, overlooking their willingness to take risks, and their ability to learn and grow from their failures. 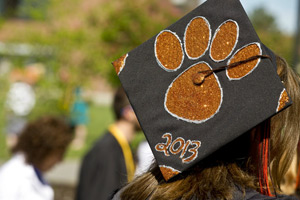 “If you are not failing, and if you are not failing often, you are not trying hard enough. Think of failure as a steppingstone to ever greater success in life,” he said. “Do not let fear hold you back. Fear of failure, fear of ridicule, fear of not knowing. When you want to accomplish something disruptive, you have to take risks. Revolutions in knowledge and life as we know it require this. I would not be here today without taking risks. I would not be here today without having failed, without being ridiculed, without spending the majority of my life dealing with the unknown.”

Prior to Kipman’s address, the audience heard from RIT Student Government President Taylor Deer, a graduating management student from Saunders College of Business.

“The more I think about it, this school was my life, it gave me the skills I needed to set myself up for success, and it gave me the confidence to say, ‘Maybe one day I can change the world,’” Deer said. “We are moving on to be role models for our successors. Future students will be looking to us to hear about our success stories after school. When we are successful, we give next year’s class the feeling that they too can have an impact on the world. And there is nothing more valuable than that!”

“The world is waiting for you out there, but you don’t know what the future holds,” Destler said. “The RIT campus, once as unknown to you as your future, has become a home away from home. You have found friends and mentors here, and you have set upon a career path. But now the ‘real world’ beckons, and you are both nervous and excited about the future.”

Academic Convocation serves as RIT’s campus-wide commemoration of the conclusion to another successful academic year. During the ceremony, President Destler conferred degrees on more than 3,500 undergraduate and graduate students. Diplomas are then distributed to graduates following the event at separate ceremonies held by each of RIT’s nine colleges and two academic centers.