RIT celebrates the class of 2017

Less than a decade after graduating, a successful Rochester Institute of Technology alumnus returned to campus today to give the commencement speech to some 3,500 graduates, including 32 students who earned Ph.D.s. An honorary degree was also conferred upon a key figure in the establishment of RIT Croatia.

“Success did not come quickly or easily,” said Austin McChord ’09 (bioinformatics), founder and CEO of Datto, a billion-dollar company that backs up and restores data. “Sometimes failure can be one of the most liberating places to be.”

McChord told the graduates that hard work, doing something they love to do, not following traditional paths in life, and luck are all keys that can help them become successful, even if they don’t conform to everyone else.

Highlights from Friday’s ceremony. A video of McChord’s full speech is also available.

“The world has this way of pushing you into tracks and paths,” McChord said. “In a few years, you’ll see. Maybe some of your friends are buying a house, others are getting married and having kids. There is an expectation or pressure we’re all supposed to keep up. Just realize that it is an illusion. This life is yours and there is no requirement that you follow anyone else’s path.”

The academic convocation, held in the filled Gordon Field House, is the start of two days of graduations for each of the colleges of RIT.

RIT Provost and Senior Vice President for Academic Affairs Jeremy Haefner served as emcee. He gave special recognition and a diploma cover to RIT President Bill Destler, who is retiring next month after 10 years heading the college, and Destler’s spouse, Rebecca Johnson.

“I think what students will remember most about Dr. Destler and Dr. Johnson is their engagement with and support of students at every level – having lunch with them in the cafeteria, attending cultural and sporting events and providing an environment that encourages learning and innovation, civil dialogue on difficult topics, and creating opportunities for our current students and students in the Rochester City School District to pursue their dreams through higher education,” Haefner said.

Destler congratulated the graduates, who are joining more than 121,000 RIT alumni residing in more than 140 countries.

“To all of you, I offer my warmest congratulations on reaching this point in your life’s journey,” Destler said. “And today is a special day for Rebecca and me, since we are graduating from RIT with you. We took 10 years, but we finally graduated.”

Destler received a standing ovation after his remarks. 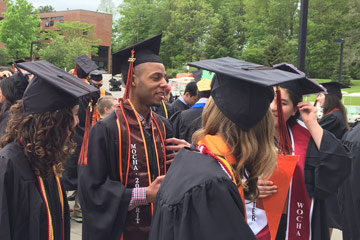 Students gather outside Gordon Field House and Activities Center prior to Academic Convocation.

Haefner, Destler and RIT Board of Trustees Chair Christine Whitman conferred an Honorary Doctorate of Science degree on Radovan Fuchs, who was instrumental in the establishment of RIT Croatia. Serving as a deputy minister for the Croatian Ministry of Science and Technology at the time, Fuchs was a member of the team that reached out to RIT. He played a key role in securing the Dubrovnik campus, acquiring Croatian accreditation for all three undergraduate programs, establishing the college’s second location in Zagreb, changing the legal foundership structure, and legally changing the name from the American College of Management and Technology to RIT Croatia.

McChord was an RIT student when Destler arrived as president. After college, McChord returned to Connecticut and began working in his father’s basement. He envisioned a startup company and wrote a one-page business plan and dreamed it could someday be sold for $100,000.

He ended up funding the company with $80,000 in credit card debt and working a part-time job at a packaging company. His business began to grow slowly and unconventionally.

“From the beginning, I made a point of trying to make the office as fun and ridiculous as possible,” riding toy cars and playing beer pong as much as possible, he said. “While it was fun, it also helped mask the fact that in those early years, we were never more than a few weeks away from going out of business.”

A few years later, he turned down $100 million for his company. He said his lawyer told him, “You could regret this decision for the rest of your life, from the beach of your own private island.”

But he wasn’t ready to hand the reigns over to others. One reason was that his friends who had helped him start the company wouldn’t have benefitted from the deal.

“Building something great is never a solo endeavor,” McChord told the graduates. “Getting you to where you are today has taken the effort and support of hundreds of people, from your parents, to the numerous teachers, mentors and professors that have given you the knowledge and inspiration to earn your degrees. … Greed rarely builds greatness.”

He considers said personal connections to be great assets to collect.

“One of the most valuable things you will have gained from RIT will be the people you have met,” McChord told the graduates. “The connections you have made here will last a lifetime. They will prove to be invaluable to you and stand to make more of a difference than anything you have learned in a classroom.”

McChord ended by quoting Mark Twain: “Twenty years from now you will be more disappointed by the things that you didn’t do than by the ones you did. So throw off the bowlines. Sail away from the safe harbor. Catch the trade winds in your sails. Explore. Dream. Discover.”