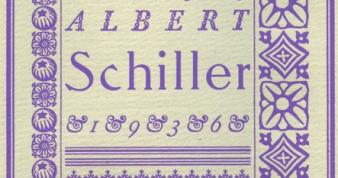 Albert Schiller (1898-1970) was a talented, creative, and well respected advertising typographer who worked in New York City from 1920s through the early 1960s, spending most of that time as typographic art director for Advertising Agencies’ Service Company, Inc. He is, however, best known for his type pictures which were made primarily from type ornaments. While working for Advertising Agencies’ Service Company, he produced over twenty major type pictures for use as the company’s Christmas holiday greeting for clients and friends. Schiller also created several type pictures as tributes to people he admired such as Frederic W. Goudy and Bruce Rogers. Several smaller pictures were created as well for use in his client’s advertising and the company’s promotional pieces.

Schiller wrote: “Printers’ type ornaments as produced by type-founders, are to me ‘prefabricated’ pen strokes prepared in limitless duplication and considerable variety which have but to be put together to form a picture. . . . This is distinctly a machine age development of sensational significance to create art. . . . The key to this most personal form of expression is my secret of mind that selects with sensitive discernment the units to be combined and guides the entire design to completion. . . . By my power I can visualize the final effect as if on a mental screen, and strive toward it by a series of simple, though very exacting, mechanical operations.”

The Melbert B. Cary Jr. Graphic Arts Collection at the Rochester Institute of Technology is the home of Schiller’s personal archive. The archive – a gift of the Schiller family – includes original prints of twenty-one of the twenty-two holiday type pictures, twelve major type forms and many smaller ones, dozens of engraved plates for the pictures, and a wide range of Schiller’s writings, correspondences, photographs, and examples of his professional work.