Albion no. 6551: The Wanderings of the Kelmscott-Goudy Press 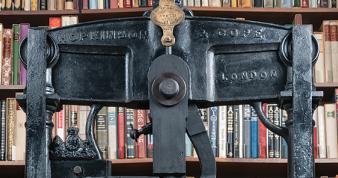 Very few surviving printing presses carry with them a known legacy of their work. So many wooden and iron machines used by master printers over the centuries ended their lives as scrap or orphaned antiques. Some have persisted to the present, and continue to be used for the book arts—their histories unknown to their current proprietors.

If not for the thick irons band wrapped around its cheeks, Albion Press no. 6551 might have slipped into obscurity like so many distinguished machines before it. The bands, as Sir Emory Walker recalled in 1932, were “added for extra strength” for the printing of William Morris’s edition of The Works of Geoµrey Chaucer… in 1896. It is with William Morris, the father of the English Arts and Crafts Movement, that Albion no. 6551 began its fabled career. Morris acquired the press in 1895, the second of two larger Albion presses. It is thought that he ﬁrst employed both presses to print the Kelmscott Chaucer, but when the oversized, ﬂoral pages of the Chaucer proved challenging to the press, the frame of no. 6551 was reinforced with the heavy bands to ensure a true impression.

If the iron bands mark the press’s beginnings, the miniature Liberty Bell placed atop its ﬁnial testiﬁes to how far the 3,000 pound, cast iron giant has traveled. The Liberty Bell was added to the press in 1962 by one of its last owners, J. Ben Lieberman. An ardent believer in the freedom of the press and an enthusiastic hobbyist printer, Lieberman would encourage visitors to his home in New Rochelle, New York to ring the bell after pulling a broadside from the press. The Liberty Bell also conﬁrms that this English export had, by that time, lived most of its life in the United States and was now very much an American printing press.

From Morris’s iron bands to Lieberman’s Liberty Bell, to its new home in the RIT Cary Graphic Arts Collection, our exhibition Albion no. 6551: The Wanderings of the Kelmscott–Goudy Printing Press traces the remarkable life of one of the world’s most fabled printing press and the extraordinary printers who operated it.