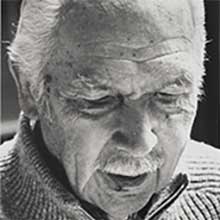 Charles T. Coiner, (1898-1989) an acclaimed painter and art director for advertising agency A.W. Ayer & Son, is also remembered for addressing the needs of the U.S. government with innovative graphic design. His pioneering efforts to seek out and commission modern artists including Pablo Picasso, Ben Shahn, Edward Steichen, and Miguel Covarrubias, and to introduce their work to advertising resulted in some of the most memorable campaigns of the mid-20th century. As a designer of war posters, civilian defense logos, and the Blue Eagle symbol of the National Recovery Administration under President Franklin D. Roosevelt, Coiner’s influence extended well beyond the world of commerce.

Coiner, who grew up in Santa Barbara, CA, worked two years as a section hand on the Southern Pacific Railway to pay for his studies in commercial art at the Chicago Academy of Fine Arts. After only one year at the Academy, he joined the Chicago office of Erwin and Wasey where he spent six years cutting his teeth in the advertising business.

A 40-year association with the Philadelphia-based agency A.W. Ayer & Son began in 1924 when Coiner was hired as a layout designer. He quickly advanced to art director and became vice president in charge of the department in 1936. The campaigns he supervised, such as those for the Container Corporation and DeBeers, were distinguished by their inspired use of fine art and their modern sensibility. During this period he also hired some of the leading graphic designers of the next generation such as Leo Lionni and Alexey Brodovitch.

In 1933 Coiner was asked to design a symbol for the National Recovery Administration, the federal agency created to encourage industrial recovery and combat unemployment. His Blue Eagle design, that he sketched on a flight to Washington D.C., was displayed by businesses all across the U.S. and as its much publicized creator, Coiner became something of a household name.

In 1949 Coiner was the first to receive the annual award of the National Society of Art Directors for “distinction in the practice of his profession.”

Since his retirement from N.W. Ayer in 1963 until his death in 1989, Coiner, whose paintings have been exhibited at the Whitney Museum in New York, the Pennsylvania Academy of the Fine Arts, and the Philadelphia Museum of Art, continued to paint and held several one-man shows in New York. 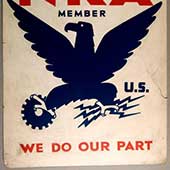 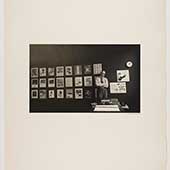