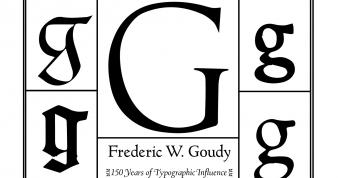 This exhibition celebrates the sesquicentennial of the birth of Frederic W. Goudy. In 1963 Professor Alexander Lawson acquired a landmark collection of books, prints, and metal type made by Goudy. This was the first archival typographic collection housed at RIT. It was a significant precursor to the 1969 donation of Melbert B. Cary Jr.’s typographic library—a complementary union of materials not only for their content, but also because Goudy and Cary were colleagues.

Over the past 45 years, Cary curators have continued to grow our holdings of Goudyiana, becoming one of the most important American repositories of his work. We assert that FWG’s achievements have not been forgotten. His legacy has certainly influenced all who have contributed to this exhibition: contemporary archivists, curators, educators, historians, printers, and type designers. May Goudy’s exuberance and creativity live on!

Reception and Lecture: May 7, 2015, 5 p.m.
Paul Shaw, design historian, will deliver a talk at the Cary entitled, In Defense of Fred Goudy.

The Cary Collection also has sponsored a Keepsake Exchange in honor of the Goudy 150th Anniversary. The finished portfolio will be featured on our site in late Spring 2015.