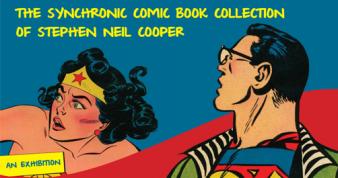 The Stephen Neil Cooper Synchronic Collection of Comic Books is comprised of 202 comic book titles that were for sale on newsstands and racks in candy-stores throughout America in April 1956. This unique accumulation of simultaneous publications was instigated by my 1992 acquisition of a favorite issue of “Strange Adventures”, #67, with a cover dated April 1956. Instantly inspired to find all the comic books surrounding this favorite, I assiduously amassed and upgraded the collection over the course of ten years. At first, simply determining the titles and issue numbers needed was a monumental task, but with steady effort, comic books embodying all the genres: superhero, western, romance, teen, movie & TV, adventure, war, crime, funny animals, science-fiction, humor, horror and mystery, were all hunted down and acquired. This broad array of characters and realities, with their distinctive graphic depictions, styles, and identities, provides a vivid, colorful, wide-angle view into the pop-culture zeitgeist of mid-20th century America. On display are all the characters, real and imagined, that populated the landscape. Characters and stories came from Hollywood movies, from radio and television, from movie cartoons, from the daily and Sunday strips, and from classic literature. Some, like Superman, first seen in 1939, were originally created for the new medium of comic books. Comic books are a typical example of historical ephemera, that is, transitory matter not intended to be preserved. The word ephemera derives from the Greek, meaning things lasting no more than one day, and in fact comic books evolved from origination as discarded Sunday Funnies that were salvaged, wrapped in shiny covers, stapled and put back on the newsstands for a dime. And so comic books were traditionally printed on inexpensive, low-grade newsprint paper, sold to kids who folded them, stuck them in their back pockets, played sports, went to school and sat down on them. And let’s not forget all the mothers who trashed precious collections when you went away to college! Therefore, high-grade pre-1960 Golden-Age comic books are rare; when found they have a palpable, skin-tingling impact. The pure primary colors, the yellows, reds, greens, browns and blues, that define the visual milieu of the mid-fifties era, are all seen here in a brilliantly evocative display. --Stephen Neil Cooper