Lester Beall, Designer of the Freedom of the Press Stamp 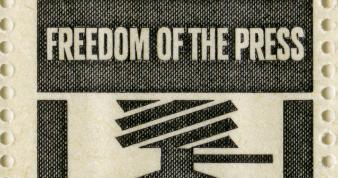 On September 22, 1958 the United States Post Office saluted “the proud profession of journalism by dedicating a commemorative postage stamp to a basic American right—our American free press.” So spoke L. Rohe Walter, the special assistant to the postmaster general, at the stamp release ceremony that was held at the world’s first School of Journalism at the University of Missouri. Walter delivered a rousing lecture highlighting American history’s great guarantors of freedom of the press: Thomas Jefferson, the author of the Declaration of Independence, and also Benjamin Franklin, America’s first postmaster. Joseph Pulitzer was also quoted in the remarks: “Our Republic, and its press will rise or fall together.”

A commemorative binder with a sheet of these 4 cent “Freedom of the Press" stamps, along with a transcript of the dedication speech is held in the RIT Cary Graphic Design Archives as part of the Lester Beall Papers. Beall (1903-1969), was a New York-based modernist graphic designer who won the commission for the stamp design. Mr. Walter commended the design as follows: “Currently the Post Office Department carries close to three billion copies of newspapers a year in the furtherance of its traditional position as handmaiden to the nation’s free press. This new stamp is in the same tradition. Its distinctive design, emphasizing a hand holding an old-fashioned quill pen, a stylization of a hand printing press and horizontal and vertical bars suggesting type bearers, is the work of the noted artists and designers, Lester Beall and Charles Goslin.” (Goslin, [1932-2007], then at the brink of his career, went on to teach design at Pratt Institute.)

One hundred twenty million of these stamps were printed at the U.S. Bureau of Engraving and Printing in 1958. Their design is just as fresh and their message just as relevant, almost 60 years since their date of issue.