A Letter by Giambattista Bodoni 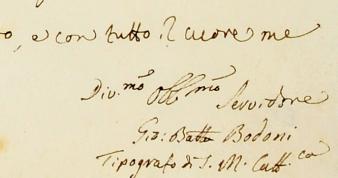 The Cary Collection is pleased to announce a landmark acquisition of a letter written by the famed type designer, punch-cutter, and printer Giambattista Bodoni, (1740-1813). Bodoni spent most of his life publishing elegant editions for the Duchy of Parma in Italy. He supervised production of numerous courtly publications including announcements, invitations, and presentation books for the aristocracy. Bodoni was well respected and given a measure of freedom to pursue his own projects, especially magnificent type specimens that catalogued his thousands of character designs. Bodoni, along with Firmin Didot in France, is credited with pioneering a new classification of typefaces—the Moderns or Didones. These are letterforms characterized by highly contrasting thick and thin strokes, a vertical axis, and unbracketed hairline serifs.

The autographed letter that joins Cary’s extensive collection of books printed by Bodoni was written to his patron, Duke Ferdinand of Parma. It is translated as follows:

With the last delivery I received the paper of the Novelle Letterarie with the announcement of my letter to the Marquise de Cubières and of the letter in which the famous Franklin from Philadelphia was kind enough to congratulate me. I am beholden to you and your kindness to have acted with such energy and speed on the inquiries I directed to you through the distinguished sign. Ab. Biamonti, and I hope before long to have the opportunity to express this my sincere gratitude to you in person which I feel for the many signs of benevolence and partiality that you have given me over time. My own inadequacy at this point permits me only to express how obliged l am and you may ask for whatever you wish to make up for this inadequacy. Please take my word that I offer this with all my true spirit and my whole heart.

This rare document is especially exciting because it mentions Bodoni’s connection to the American statesman and printer, Benjamin Franklin. On October 14, 1787, Franklin wrote Bodoni a letter praising his work. He stated that Bodoni’s book was “one of the most beautiful that Art had hitherto produc’d.” And that he “should be glad to see a Specimen of your other Founts besides this Italic and Roman…” [For a full transcript of Franklin’s letter please see The Papers of Benjamin Franklin.]

In the letter now at the Cary Collection, Bodoni refers to an Italian translation of Franklin’s note that was celebrated and even published in the Novelle Letterarie, a Florentine newspaper. Apparently, some Italian officials misjudged Franklin’s status in the new United States, as they thought Bodoni had received a letter from the American president! Bodoni went on to publish his first complete type specimen book soon after writing this letter, his Manuale Tipografico of 1788, sealing his remarkable legacy in the history of printing.

This 1788 letter by Giambattista Bodoni may be viewed at the Cary Collection from Monday through Friday, 9 a.m. to 12 p.m. and 1 to 5 p.m., or by appointment with a curator.