The Light of the Sublime 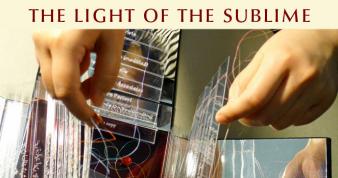 The Works of Rumi as Interpreted by Zahra Partovi and Vincent FitzGerald &amp; Co.

Download the exhibition catalogue for The Light of the Sublime.

A performance of "Fragments of Light 6" the latest collaboration between Zahra Partovi, Naho Taruishi, Alyssa Reit, and Vincent FitzGerald & Co., is scheduled to be performed on April 12 at 5 p.m., followed by a reception.

A new exhibition at the RIT Cary Graphic Arts Collection will focus on contemporary artist books inspired by the verse of the acclaimed Persian poet Jalaluddin Moḥammad Rumi, (1207–1273). “The Light of the Sublime: The Works of Rumi as Interpreted by Zahra Partovi and Vincent FitzGerald & Co.” will open on April 12, and be celebrated during a reception and light installation performance that evening at 5 p.m. Some 15 limited-edition artist books and materials explaining their fabrication, along with several short films will be on view at the Cary Collection. Scholar and translator, Zahra Partovi, will be in attendance, as will publisher Vincent FitzGerald.

Rumi is an iconic figure in the history of Persian and Iranian literature. He was first a mystic and teacher, but late in life turned to poetry to express basic precepts on Sufic philosophy, love, and closeness to God. The themes of his works are universal, and as such are widely translated. Zahra Partovi, a graduate from Tehran and Columbia Universities, has dedicated several decades to research on his writings. She states, “This masterful poet combines philosophy, mysticism, and psychology in a language so piercing as to enter the realm of music. It is this element more than any other which has made Rumi’s poetry so irresistible to readers for over 700 years.”

Vincent FitzGerald & Co. is a publisher, active in New York City since 1980, that champions the book as a medium for merging the talents of fine artists and authors. FitzGerald has published over 45 books, 15 of which have centered on the work of Rumi. Fine printing, calligraphy, and innovative binding styles characterize each title, released in very limited edition and collected around the world in libraries, museums, and private collections. Book dealer Priscilla Juvelis has stated, “[FitzGerald] books do something so unique asking our mind and our eye to read and look at the same time; they stimulate imagination.”