The Printer's Manual - An Illustrated History 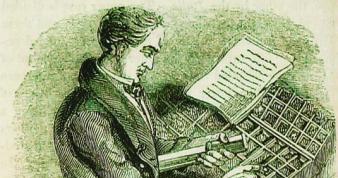 Classic and Unusual Texts on Printing from the Seventeenth, Eighteenth, and Nineteenth Centuries

As printing from movable type was perfected in the ﬁfteenth century, the mysteries of its practice were guarded by a privileged few. Gutenberg himself took great pains to avoid disclosing the techniques he had developed for the rapid multiplication of books, only to see the fruits of his long research snatched away from him by his chief creditor, Johann Fust, in an ignominious lawsuit. To make matters worse, tradition has it that Gutenberg’s apprentice Peter Schöffer took the secrets of the new craft, joined forces with Fust, and, together with his new partner, reaped the beneﬁts of his former master’s toil.

The rapid spread of the new art, however, depended on the development of a reliable mechanism for transferring knowledge, and printers naturally adapted the established practices of the medieval craft guilds. The essential facts and techniques were passed on from master printer to journeyman to apprentice, together with all of the attendant ceremonies of initiation and pledges of fellowship. Like a dynastic succession, the management of an early printing ofﬁce was often kept within a particular family, sometimes for generations. In this way, the art of printing was preserved and sustained, often carefully veiled from outsiders, and always the product of years of close study and practice.

By the end of the seventeenth century, however, the pioneers of manufacturing technology and scientiﬁc inquiry were prying away at the rotting doors of medieval trade secrecy. One of this new breed, a sometime printer by the name of Joseph Moxon, found a congenial climate in which to publish his Mechanick Exercises. The work was issued in 1683 and contained, among other treatises, the ﬁrst printer’s manual in any language. Moxon had mastered a number of mathematical and mechanical skills; his justiﬁcation for sharing them with the “good and curious workman” appeared in the preface to volume one:

The Lord Bacon in his ‘Natural History’ reckons that philosophy would be improved by having the secrets of all trades lye open; not only because much experimental philosophy is caught among them, but also that the trades themselves might by a philosopher be improved. Besides, I ﬁnd that one trade may borrow many eminent helps in work of another trade.

Though successors to Moxon followed slowly at first (only two more English manuals of any significance were published between 1683 and 1800), the nineteenth century saw a proliferation of printing and a sizeable increase in the number of manuals, dictionaries, tracts, and other works written about it. Nearly every one of them owes something to Moxon, either for material borrowed (sometimes generously) or the inspiration for existing at all. Many of the customs of a printing ofﬁce were ﬁrst described by Moxon. Some, like the printers’  Wayzgoose, survive as the quaint recreations of historians or amateur printing societies.

Others still endure today, but in a strange, transmuted fashion. The Chappel, for example, the customary term, “time out of mind” says Moxon, for a printing-house, lived well on into the twentieth century in the production departments of newspapers. There, a chappel denoted the room in which the employees sat before being called to their stations by their union shop steward!

This selection shows the history of printing manuals, from 1683 to the end of the nineteenth century, including some of the rarest in existence. The focus has largely been on English and American works, though manuals have been published in many languages. A few early French and German manuals have been admitted because of their connection to Moxon, or because of their intrinsic interest to the development of the genre. Some titles, like The History of Printing, published by the Society for Promoting Christian Knowledge, are included for their thorough accounts of printing-ofﬁce practice and their instructive value, even though, strictly speaking, they are not printer’s manuals. As for why a catalog of this sort should compel the attention of aspiring printers, graphic arts students, and historians, one need go no further then to Lawrence Wroth’s essay “Corpus Typographicum,” published in Typographic Heritage (New York: The Typophiles, 1949).
He writes:

The thoughtful printer of today still goes to those manuals to learn the ancient traditions of type, composition, and impression, for despite the improvements worked by the centuries in mechanical means, the fundamental materials, instruments, and operations of typography have remained unchanged … It is not as relics of a misty past, therefore, that I propose to write of them here, but as living, age-less books of instruction with lessons for all of us who are concerned with the practice, theory, and history of the printing craft.