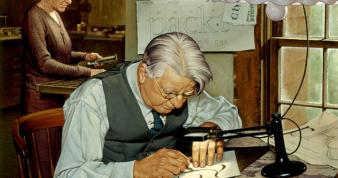 In 1960, The School of Printing prevailed upon Mrs. Howard Coggeshall of Utica, New York to donate her late husband's collection of memorabilia relating to the American type designer, Frederic W. Goudy. Mr. Coggeshall, a noted American printer, had for many years served as printer for each new type which came from the designer's workshop in Marlboro, New York during Goudy's most prolific period. From the late 1920s to his own death in 1948, Mr. Coggeshall acquired the largest collection in existence of Goudy types. They became invaluable after the Goudy workshop was destroyed by fire in 1939, resulting in the loss of many of the drawings and matrices; several fonts were the only surviving examples of particular faces. When these rare types became the property of the School of Printing, members of Gamma Epsilon Tau journeyed to Utica to transfer them from the Coggeshall cases to those of the school. A room was set aside to house the collection. Named the Frederic W. Goudy, Howard W. Coggeshall Memorial Workshop, it was dedicated in January 1960, during the celebration of National Printing Week.

When the school was removed from downtown Rochester to its present location, enlarged space was provided for this workshop; however, it was not possible to fully fund it as a laboratory because enormous expenses were already involved in the setting up of the other facilities needed.

Early in 1969, the Trustees of the Mary Flagler Cary Charitable Trust visited the school to discuss the possible donation of the typographic library of Melbert B. Cary, ]r. (1892-1941), a printer who had made important contributions to his field as the American distributor of European types; in addition he had operated a notable private press, The Press of the Woolly Whale.

Mr. Cary had been a longtime friend of Goudy and had, in fact, served as distributor in the marketing of a number of his designs. Goudy also served as a Vice President of the Cary firm, Continental Typefounders. Additionally, Mr. Cary had compiled and printed the most complete bibliography of Goudy's Village Press. Following a wide-ranging discussion, the Cary Trustees and School of Printing administrators decided that the space occupied by the workshop would be ideal for the Cary Collection, situated as it is in a central location convenient to all students. Thereupon the Melbert B. Cary, Jr. Graphic Arts Collection was established, and the workshop was removed to the first year laboratory of the Typographic Composition courses in the hope that the numerous examples of Goudy typography would serve as a continuing inspiration to present-day students.

The Cary Trustees also funded an annual Frederic W. Goudy Award to be given to an outstanding practitioner in the field of typography. The person selected would deliver a Goudy Lecture and meet with students in class and in groups, thus providing an opportunity for informal contact with a distinguished graphic arts figure. A glance at the list of recipients of the award since its inception two decades ago is indicative of the its positive contributions to the programs of the school.

Frederic W. Goudy, born in 1865, designed his first type, Camelot, in 1896. By the time of his death in 1947, he was beloved not only for his contributions as a type designer who produced upwards of 123 typefaces, but also as a warm human being who brought to American printing an aura of greatness in his chosen field. Unquestionably the most Widely recognized figure on the American printing scene for a good part of his life, he dedicated himself to its continued progress in the spirit of the great printers of the past. Here at RIT that image remains constant and will continue to stimulate young people who choose printing technology or management as a meaningful career.

The text from this online exhibition is derived from Twenty Years of the Goudy Award, a publication produced at the RIT School of Printing in 1988.