Selections from the Printing Medal Collection of Erich Wronker 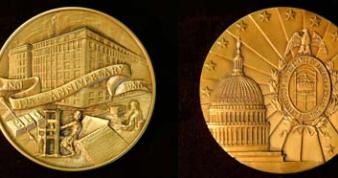 A collection of printers' medals is interesting not only because it offers a visual record of great printers and of events in printing history, but also because the very art of making medals is closely connected with the beginning of printing

Erich Wronker was born in 1921 in Frankfurt am Main and grew up in the small German town of Koenigstein. In 1933 the Nazis forced the family's flight to Paris, where he attended secondary school. The family then left for Cairo, and soon afterward Erich went to Palestine, where he studied agriculture. His studies there were interrupted by war, and he was drafted by the British and served in the Jewish Brigade. During and after World War II he helped many concentration camp survivors to relocate and reunite in Palestine. He served in the Israeli Defense Forces, but declined an offer to be trained as a diplomat. After the war, while living in Haifa, his interest and knowledge of Judaica, archaeology and numismatics took shape and began to grow.

While living in Israel Erich had wanted to become a printer but refused to borrow the money necessary to enter the printers' union. When he moved to New York in 1953, he was rejected for Typographical Union membership for being too old and for not being the son of a union member. But there Arnold Bank taught him to trace types, while Eugene M. Ettenberg's book Type for Books and Advertising taught him the rudiments of design. After spending a thorough typographic apprenticeship at the famous shop of Edwin Rudge, he learned book printing from Robert Haas of the Ram Press, after which Dr. Robert Leslie helped him gain a proofreading position at the New York University Press. Erich next took a position as a proofreader in the Treaty Series department of the United Nations where he became chief and remained for 25 years.

In 1955 Erich bought a Chandler & Price platen press and began producing books, greeting cards, stationery, and proofs for book jackets and exhibits. He also taught typography and letterpress printing at the Cooper Union, was a founding member of the American Printing History Association, a member of the Typophiles, and a Fellow of the American Numismatic Society. He became an expert on printers' medals, awards, coins and badges, and other aspects of numismatics, and formed one of the largest collections in private hands. In 1991 he contributed an article and a portfolio based on his collection to the scholarly journal Printing History.