"From Microbes to Mankind and Beyond, Diversity is Here to Stay!" | May 2022

Newsletter May 2022
"From Microbes to Mankind and Beyond, Diversity is Here to Stay!"

Say the word “mentor” and many students will mention this name: Robert Osgood. The RIT professor has been mentoring students ever since he first stepped on campus 14 years ago.

Osgood is associate professor of microbiology in the College of Health Science and Technology and is the recipient of the 2021-2022 Isaac L. Jordan, Sr. Faculty Pluralism Award. Jordan, a dedicated leader in enhancing diversity issues, was the first chairperson of RIT’s Commission for Promoting Pluralism. The award recognizes RIT faculty who make significant contributions to enhance diversity, pluralism and inclusion. 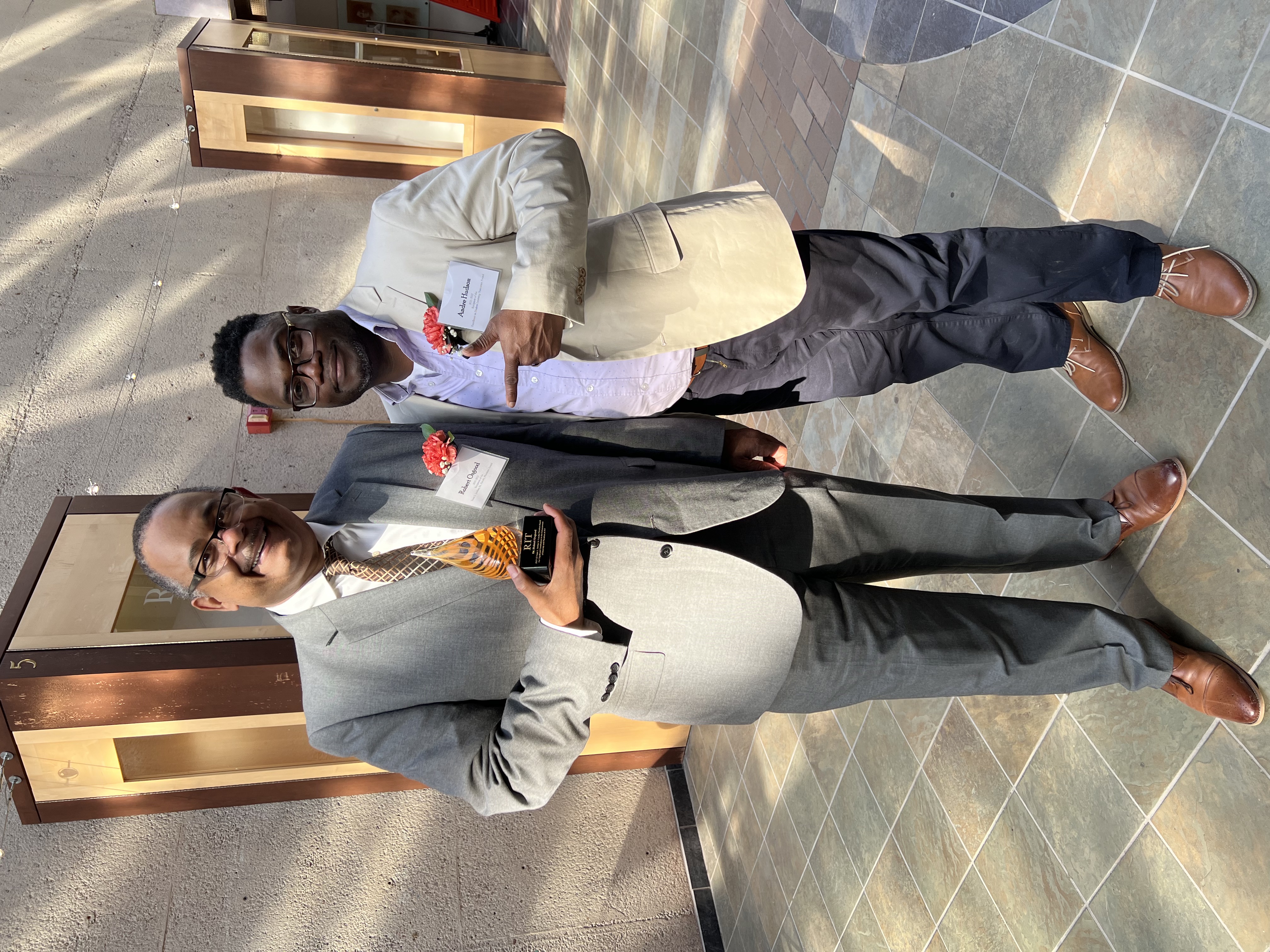 Osgood says receiving this award means a lot to him because he has a deep respect for the work Jordan did.

“I am honored to be mentioned in the same breath as Dr. Jordan. I have received many awards and nominations throughout my life. However, this one --- this one --- is the first one that really illuminates a service that I really enjoy providing. I’ve often heard that “Your gift will make room (a way) for you”. I remember hoping that this was true, but have come to know that it is true. This honor encourages me to be even more committed to my love of service and helping to encourage everyone to reach their potential. This honor also means that the impact of this work is noticed and appreciated. “

Osgood worked for more than 20 years as a medical technologist before joining the RIT faculty in 2008. One year later he had created the Osgood Power Lab and ever since then, he has been engaging and mentoring underrepresented students from RIT, area high schools and students from LSAMP alliance-associated institutions. He created the CBET infectious disease camps for all high school students. He has mentored and coached junior and senior high school students, some earning 1st place honors, in statewide STEM poster competitions. During the summer months, when many are eager to get away on vacation, Osgood works with STEM camps for high school students who are exploring STEM careers.

He mentors others because others mentored him. Two of his fondest memories include one, where his mother purchased him his first microscope and the second is his dad who always told him “You can do anything that you want to”. Armed with that kind of confidence, Osgood says he was also fortunate to have others in his life whose lessons he still carries with him today.

“In high school, I never liked chemistry, but boy did I try to understand and like the stuff as I did biology.  Even today I still laugh with my high school chemistry teacher and my first of many academic mentors, Mr. Carl Palmer Jr. about something that he wrote in my senior year high school yearbook.” He said, “Don’t let your grades in chemistry discourage you.” I took this to mean that my success was to be had somewhere else and that it’s OK to not like chemistry. I took his advice and took note over the coming years as to whether I was right. As an undergraduate at Jackson State University, it was Dr. Arthur Jones and Herman Nixon. They helped me see the “big picture” of life and the big picture of the possibilities that were mine for the taking, if I would just apply myself and work for it. Dr. Charles Rhyne was my first research mentor as he introduced me to how I could help him study the effects of acid rain on plants. This was a simple enough concept for me to grasp mentally and to which I could apply my natural curiosity, imagination and heightened interest in helping to better understand and hopefully solve the problem. As I began to “peek into the window of graduate school,” my next mentor, a microbiologist himself, Dr. Mark Hardy noticed my interest in all things small, a probable carryover from my love of microscopy that grew on me from the microscope that was introduced to me by mother, and gave me special permission to take his graduate class in microbiology while I was still an undergraduate. I made a “B” in that class, and it was then that I knew I could handle graduate school. I think Dr. Hardy knew that before I did, but he wanted me to discover it for myself. Although my master’s and Ph.D degree were separate, respectively, Dr. Larry Bopp and Dr. Bobby L. Middlebrooks were my graduate mentors. Dr. Middlebrooks initially was just the highly respected chair of the department and leader of our research lab, but gradually became a friend, cheerleader and eventually someone that I just could not let down. Leaving people that support you is never easy to do, but this was one of the last lessons that Dr. Middlebrooks taught me. He strongly encouraged me to pursue the postdoctoral training at the University of Alabama at Birmingham Institute of Oral Health. After arriving at UAB, I was introduced to my next mentor, with whom I am still in contact with today. Dr. Noel Childers had instant belief in me and expected me to perform at his high standard.  We developed more than just a professional relationship, he began to refine me in his own way as Dr. Middlebrooks had done before. His mentorship was instrumental to my success. When it was time to leave my fellowship, he knew that it was just that time in my career that I had to move forward. Both of us were teary eyed during our last meeting, but it was my time to come to RIT.”

Yes, it was “his time” and something odd helped confirmed it.

“I have to mention right here, an interesting and highly coincidental fact is this.  When I was in graduate school, I also worked in laboratory medicine. My password was “Therit”. During those years, I did not even know of the existence of The Rochester Institute of Technology. Interesting. Upon arriving at RIT, my mentor was Dr. Doug Merrill. He knew that I was new to the professor experience and mentored me until his retirement.”

Osgood’s willingness to share his knowledge and experiences with his mentees has not gone unnoticed. He is the recipient of numerous awards including recognition of excellence as a faculty mentor by the RIT McNair program, recognition for excellence in research mentoring by the RIT STEP program, and he received the RIT Faculty Beacon Award from the Division of Diversity and Inclusion (2020).

Last year, the professor was selected to be a Co-principal Investigator of the Upstate Louis Stokes Alliance for Minority Participation (ULSAMP), and will continue in that role through 2027.

As a mentor, he shares his knowledge and experience with students, but he also learns from them.

“I have learned that other than generational changes and access to technology and information, students have not changed very much. They are much like me and my colleagues when we were in college. They are in need of guidance, they need encouragement and many of them are first generation students, so they don’t have a lot of educated or experienced support at home. I have also learned that they expect us to help them learn how to be successful beyond the classroom. I’ve learned that many of them are just like I was --- hopeful for a better future and they want a better life than the one they had growing up.”