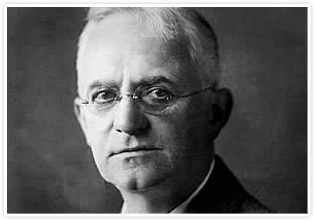 Inventor, philanthropist, and the founder of Eastman Kodak Company, George Eastman is heralded as the father of popular photography and inventor of motion-picture film.

George Eastman was one of the major philanthropists of his time. During his life he donated more than $100 million to educational and arts institutions, public parks, hospitals, dental clinics and charitable organizations around the world. The Mechanics Institute, now the Rochester Institute of Technology received $625,000 in 1901.

He was born in 1854 in the Central New York village of Waterville. That same year, his father, George Washington Eastman, established Eastman's Commercial College in Rochester, NY. After many trips between Waterville and Rochester, the elder Eastman moved the family to Rochester in 1860.

Eastman's interest in photography began in 1878, when one of Eastman's friends suggested that Eastman, 23, take a camera on an upcoming vacation with this mother to Santo Domingo. Eastman bought a photographic outfit, and although he never made the journey, he became fully engrossed in photography.

The weight, awkwardness, and cost of a photographic outfit soon led Eastman to experiment on improvements. Unhappy with the excessive work and materials required to take and develop photographs, Eastman searched for a simpler way to develop negatives. He spent three years in his mother's kitchen experimenting with gelatin emulsions. By 1880, Eastman had invented and patented a dry-plate coating machine.

Eastman founded the Eastman Kodak Company in 1892, an organization that revolutionized photography through simplification. With a series of landmark innovations, the company created small, easy-to-use cameras like the famous Kodak camera introduced in 1888 with the motto: You press the button, we do the rest. The company also invented a flexible film that helped launch the motion picture industry. Today Eastman is known as the man who brought the joy of photography to millions around the world.

To ensure the success of his company in Rochester, Eastman left in his will money that would encourage education, appreciation of the arts, and expansion of medical services in the community. George Eastman served as an RIT trustee from 1890-1915, and Chairman of the Board from 1913-1915. He was a generous benefactor of the Mechanics Institute and donated much of the funds for the original Eastman building on the downtown campus.

He provided the impetus to raise the Institute's first endowment money and buy its first property. In 1892 he raised money for the Mechanics Institute by offering to subscribe $5,000 if nine other people matched his donation. These combined donations were significant in enabling the rapid growth of the downtown campus.

Today, RIT has a building dedicated to Mr. Eastman in recognition of his support and substantial donations to institution.