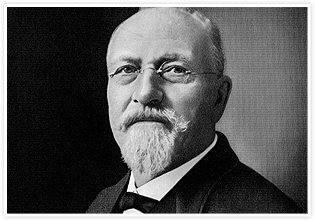 John Jacob Bausch was born in Gross Suessen, Germany in 1830. He was 18 when he moved to Berne, Switzerland, where he found work in an optical shop designing camera lenses. The following year, in 1849, he emigrated to New York City and worked as a cook's helper and woodworker. He continued to dream of working in the optical trade.

After an industrial injury prevented him from continuing as a woodworker, Bausch sold spectacles from his home and soon opened a retail optical shop in Rochester, New York in 1853. His persistence would be tested, for it took eight years before his optical business turned a profit. His friend Henry Lomb invested his savings in Bausch's shop and in 1855 became his partner.

Even with the loan, the business floundered until Bausch stumbled upon a piece of vulcanized rubber on a walk in New York City. He began to experiment, carving the rubber into a shape, melting it on the family stove, and hand-forming it into eyeglass frames. The popularity of the affordable and durable Vulcanite frames, Bausch's skill and inventiveness, and Lomb's continued support and leadership enabled the company to thrive.

By the 1870s, water-powered lens grinding machines were producing the first optical-quality glass made in America. By 1885, Bausch & Lomb was Rochester's biggest industry. It would grow to become the largest optical company in the world.

Bausch's creativity led to a dizzying array of innovations in the century that followed: photographic lenses...turn-of-the-century patents for microscopes and binoculars...equipment for "testing" eyes...wartime telescopes and ground-breaking sunglasses for the military...motion picture lenses that produced Cinemascope and an Oscar for industry contributions...lenses for the first satellite pictures of the moon . . . products for eye surgery . . . and the first soft contact lenses.

The relationship between Bausch & Lomb and the Rochester Institute of Technology goes back to the early days of both organizations. In the early 1880s, some years after the business partners founded their small optical shop, Lomb realized that the public schools of the day were not preparing workers to fill the new kinds of jobs being created by the industrial revolution, and he knew that their optical business could not find people with sufficient technical training to meet its needs. Soon after, Lomb personally helped to fund the Mechanics Institute and his personal donations kept the school operating during the early years. It survives today as the Rochester Institute of Technology.

Bausch had two sons who went on to play a major role in the development of the company he founded. All his life, Bausch remained active in the business and could usually be found on the shop floor working alongside his employees. On his death in 1926, he was honored as a man of far-reaching vision, of undaunted courage, of unfailing hope—justified praise for the man whose long, hard struggles in a new country gave birth to an industry.