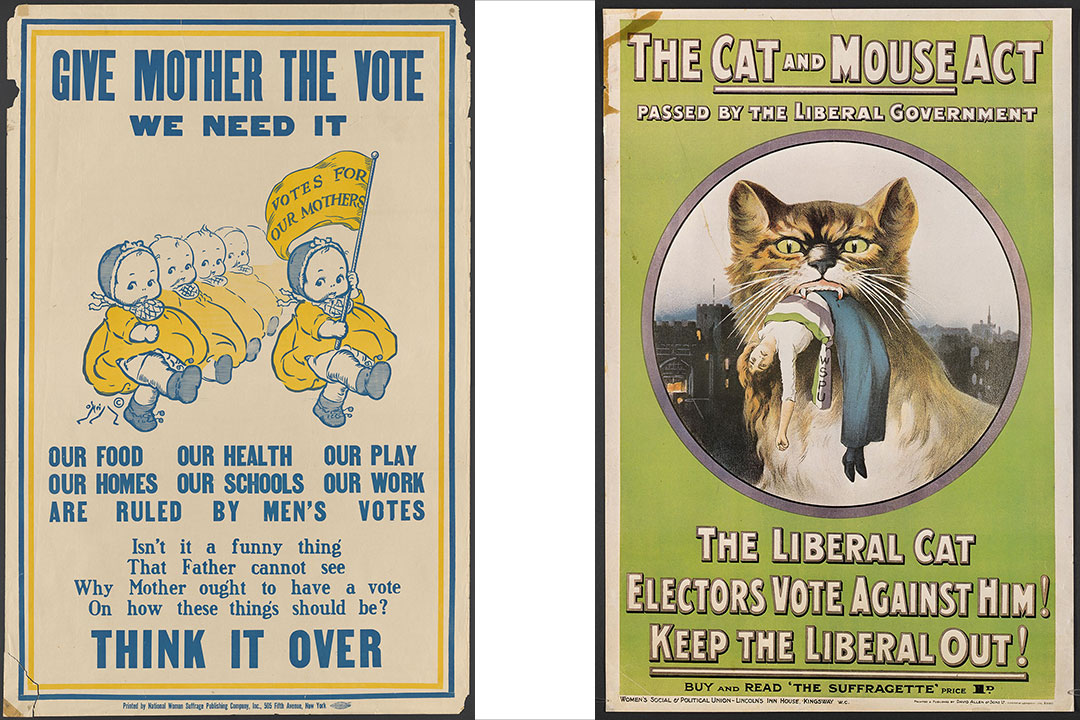 Women in the United States and in the United Kingdom fought for voting rights on either side of the Atlantic Ocean in the early 20th century, protesting for suffrage by picketing, going on hunger strikes, and using a savvy poster campaign. RIT students this semester dug into the suffrage movement’s use of graphic arts to design and create a digital exhibit of historical posters from Harvard University’s Schlesinger Library.

Women’s Suffrage Posters: A Virtual Exhibition celebrates 100 years of the ratification of the 19th amendment to the U.S. Constitution, which granted women voting rights—although it was not until the 1965 Voting Rights act that African American women were fully enfranchised. The digital exhibition is part of the university-wide program Moving Forward: Suffrage Past, Present, and Future.

The exhibit was initially conceived as an RIT faculty collaboration and having a University Gallery showing until COVID-19 altered those plans. Instead, Tamar Carroll, associate professor and chair of the history department, folded the poster project into her class “U.S. Women’s Gender and History” and gave her students the chance to salvage the exhibit by putting it online.

“The silver lining is that the students are getting to participate in the process of building an exhibition,” said Carroll, co-chair of the Moving Forward committee with Twyla Cummings, associate provost and dean of graduate education. “It’s a 100-level history course with gen-ed students from across the institute. I think it’s a neat opportunity for them to get to practice in a hands-on way with skills that historians, archivists, and art historians use in their professional work.”

Carroll gave her 32 students a challenging project. Each student selected a poster to research and follow clues that referenced a specific event or other detail. They were responsible for writing a visual description of their poster and an alt text tag for those who use screen readers, as well as for providing the historical context. Students worked in groups and created themed content for the exhibit website on the Moving Forward website. Their goal is to make the exhibit live by Nov. 2, in time for Election Day, Carroll said.

First-year students Sydney Cornell and Megan Strecker enjoyed delving into the posters’ symbolism and historical context, and identifying connections and different themes, such as “Getting the Word Out,” “Allegories,” “Characterizing Suffrage,” “In Real Life,” “Advantages/Disadvantages,” and “Politics and Political Message.” They also collaborated on the logo design for the exhibit. The students talked to RIT University Communications about their work on Women’s Suffrage Posters: A Virtual Exhibition, and what they learned from the experience.

Sydney Cornell is a first-year student from Pittsford. Currently in the computer science program, Cornell plans to join the new media design program in the spring semester. She analyzed Give Mother the Vote, by Rose O’Neill, 1915.

I love how different it looks compared to the other posters. It’s graphic and the colors used reminded me of the suffrage colors (purple, white, and gold).

The babies in the poster are O’Neill’s famous creation, the Kewpie doll. The use of the Kewpie doll within this poster helped combat the stereotype of the masculine feminist and increased the number of supporters for the women’s right to vote.

What do you think about the 100th year anniversary of women’s suffrage and what it took to get there?

I think it’s remarkable that it’s been 100 years. I believe that there’s still room for further equality, but in recent years, it’s been amazing to see more women enter politics. Since 1789, there have been 57 women in the U.S. Senate, total, the first being in 1922. I look forward to seeing more female representation in politics.

Are you planning to vote Nov. 3?

Megan Strecker is a new media design major from Brookline, N.H. She explored the meaning of Cat and Mouse Act, 1913, by David Allen & Sons, Ltd., 1913.

Explain the exhibit you are working on in Professor Carroll’s class.

I’m working on finding information about my particular poster, Cat and Mouse Act, while also connecting this allegory of a cat-and-mouse chase to similar allegories in other suffragist posters. My theme allegory is one of the largest themes that you’ll encounter when you visit our website with all of the posters. I know that it’ll be fascinating to see how the entire project comes together!

For me, I love being able to apply lessons. It’s one thing to be sitting in a lecture and participate in discussions, but actually being able to analyze the history and connect the dots is enlightening. I feel like my understanding of the suffragist movement has been propelled so much just from this class alone and this project.

What is your goal for the exhibit?

My goal is to give others a glance into the movement. I know that it’s hard to put yourself into the shoes of the people at the time; we’ve made quite a bit of progress in the past 100 years, and it’s sometimes hard to think about the fact that we didn’t always have that many rights.

I chose this poster because I was curious about what the cat and woman had symbolized. The imagery is incredibly strong, but, because I was missing the context, I did not know what it was referencing. I decided that I was going to figure out the meaning behind the imagery, which is why I chose this piece.

Cat and Mouse Act uses a cat and woman to reference the British Prisoners (Temporary Discharge for Ill Health) Act 1913. This act kept many suffragists, specifically those involved in the Women’s Social and Political Union (WSPU), in an endless loop of being released from jail only to be rearrested soon afterwards. The act would temporarily free prisoners whenever their health deteriorated, which is particularly notable as some ardent suffragists would go on hunger strike while in prison.

On the flip side, this same act required the former prisoners to resume their sentence once their health conditions had improved. Because of the nature of this cycle, the poster symbolizes the constant hunt and recapturing of these suffragists through the cat-and-mouse analogy. When this act was passed by the Liberal government, the government lost support from British voters as they did not agree with the fact that the suffragists were repeatedly released and imprisoned without trial for the same offense.

Are you planning to vote in this election?

This is the first time that I’ve been able to vote in any election. I registered to vote and requested an absentee ballot from my home state of N.H. a day before moving onto campus. I know that my home state is a swing state and wanted to make sure that my vote was counted for there.