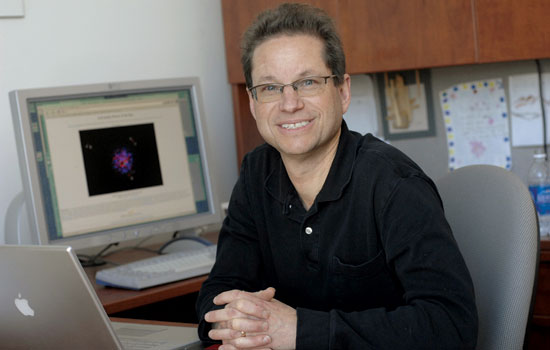 The RIT Model Railroad Club recreated the scene of O. Winston Link’s nighttime photograph of a ”plane, train and automobiles” montage, Hot Shot Eastbound at the Iaeger Drive-In, with a model-train diorama housed in a six-foot long packing crate.

Trains have found a new destination at the George Eastman House in an exhibition that runs through Jan. 25 and features a diorama created by RIT’s Model Railroad Club.

“Never in my wildest dreams could I imagine we would end up recreating a scene of O. Winston Link’s famous nighttime photograph of Hotshot Freight Eastbound at the Laeger Drive-In for the exhibit,” says David Scheiderich, club advisor.

Studying train history, collecting memorabilia and building railroad station models can be habit-forming, says Scheiderich, who works at RIT’s Educational Technology Center. He oversees 20 students in the 12-year-old college-sponsored club—home to the Rochester and Irondequoit Terminal, or R&IT, which occupies a permanent space in the basement of RIT’s Student Alumni Union.

“The R&IT is a fictitious railroad that could have existed in Rochester. Although the model is a faithful representation of Rochester’s Amtrak station with recognizable sights like High Falls and Genesee Beer and Ale, other scenes are just ‘Rochesteresque’—they don’t really exist,” Scheiderich explains.

Link’s panoramic landscape didn’t really exist either. Like a classic stage set, he used 43 flashbulbs to replicate a West Virginia trackside drive-in—showing an airplane on the screen with a high speed train in the background and a couple nestling in Link’s 1952 Buick convertible.

At RIT, Scheiderich designed a six-foot-long packing crate to house the three-dimensional color diorama, and together with railroad club members and a copy of Link’s notations regarding the technicalities of illuminating an outdoor space at night, completed the project in five weeks.

Helping out was Otto Vondrak, ’99 (graphic design) who now works as an art director in Connecticut.

“Otto founded the RIT Model Railroad Club in 1996 with Tom Rohatsch, ’00 (manufacturing technology). They were a dichotomy of two driving forces just like what we saw at the Imagine festival,” Scheiderich explains.

“The RIT Railroad Club is the perfect example of what Dr. Destler says about right brain, left-brain creativity, because model railroading involves both engineering and design skills.”

And the rail-trail connection doesn’t stop there. Vondrak met Link when he was in high school and the legendary photographer actually took the boy under his wing to show him the magic of railroading.

“He had a collection of railroad equipment that he was storing in New Jersey that he took me to see and he tried to teach me some things about photography, but I was so young I didn’t really grasp the importance,” Vondrak recalls.

“The Trains exhibition is so important to see,” adds Vondrak. “It keeps us on track with our history.”