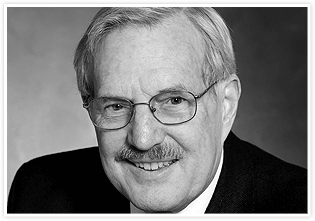 Recognized as a pioneer in the application of complex equations that convert light to clear, full-color images in digital photography, John Hamilton's innovative work focuses on the development of ever more sophisticated algorithms for interpreting data.

A graduate of Cornell University, John Hamilton received his Ph.D. in mathematics at Indiana University. In 1974, he accepted a position at the Kodak Research Laboratories where he applied mathematics to various problems in graphic arts, medical imaging, clinical diagnostic imaging, and electronic digital imaging. Before his retirement from Kodak in May of 2008, he became a Research Fellow, a recipient of the Eastman Innovation Award (2003), a recipient of the Rochester Intellectual Property Law Association (RIPLA) Distinguished Inventor of the Year Award (2005), and a member of Kodak's Distinguished Inventors Gallery with 45 patents in the area of digital image processing.

In a May 4, 2005 profile, the Rochester Democrat and Chronicle described the moment when Hamilton realized he and his research partner James Adams, were on to something:

John F. Hamilton took one look at the digital image on his computer screen and immediately thought it was too good to be true.

The Eastman Kodak Co. scientist had been laboring for months on the ideal computer recipe for converting light into real pictures inside a digital camera. And for months, it had always been the same for Hamilton and research partner James E. Adams Jr.: a frustrating string of distorted, fuzzy and otherwise unpleasant images.

But then one day, up popped this delightfully crisp image of Manhattan Square Park in Rochester. "I thought, 'Darn. We got the original in there,'" Hamilton said of his first reaction. "'Let's go get the right one.'

"But Jim said, 'No, that is the one.' Then I thought, 'Holy mackerel, what did we do?' Because it was so much better. ... Everything popped into place."

His recent work includes developing novel image processing algorithms for Kodak's digital camera business, Kodak's sensor business, and related applications. In 2008, he joined the faculty of the School of Mathematical Sciences in the College of Science at RIT where he teaches and pursues research interests. These interests include mathematical modeling broadly applied, analysis, and Fourier methods for image processing applications.