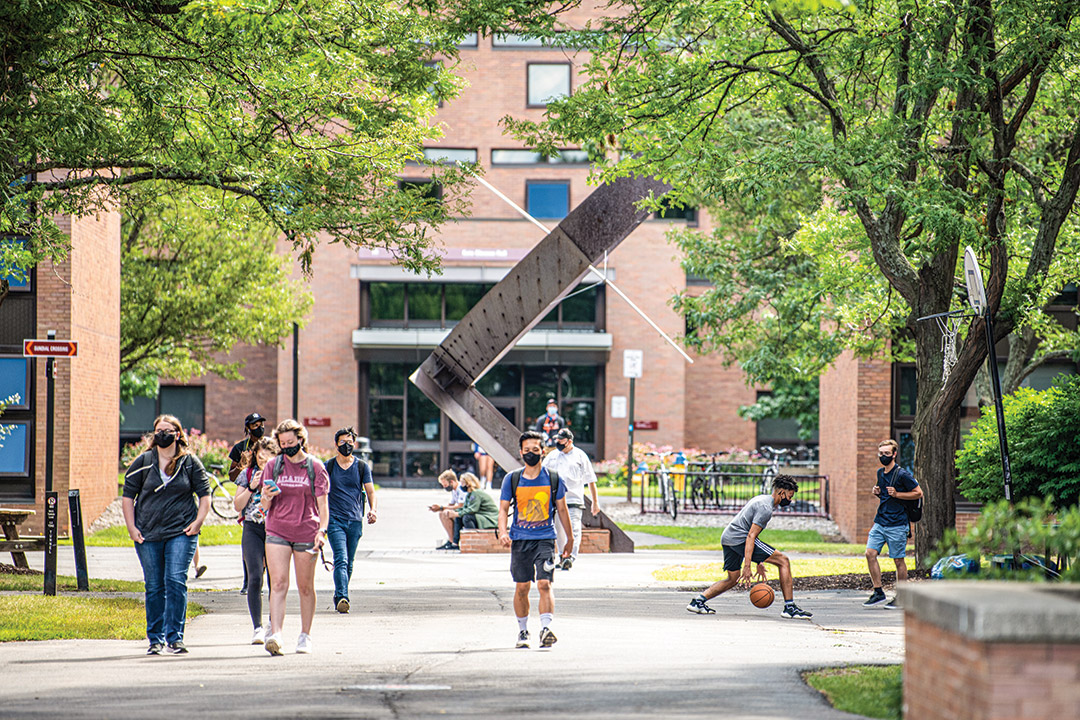 Students walk to class during the first week of the fall semester.

And similar to past years, the freshman class has high academic qualifications. For students seeking a bachelor’s degree, their average SAT score was just under 1300, and the average ACT score was 30. Perfect SAT math scores were achieved by 42 freshmen, and 13 had a perfect SAT or ACT score.

Sixty-three were at the top of their high school graduating class.

In addition, RIT welcomed 386 students who transferred from other colleges, 773 students who are pursuing a master’s degree or an advanced certificate, and a record 79 new Ph.D. students.

First-year students are from 49 states (all but Wyoming), with 46 percent of new students coming from New York state. The other most represented states were Pennsylvania, New Jersey, Massachusetts, Connecticut, Maryland, and California. Undergraduates also came from Washington, D.C.; Puerto Rico; and the U.S. Virgin Islands.

Finally, 368 members of the freshman class were recognized as Performing Arts Scholars, more than doubling the 126 program participants of last year’s first-year students.

Three new engineering doctoral degree programs were approved by the New York State Department of Education and will be accepting students this fall. They are electrical and computer engineering, mechanical and industrial engineering, and biomedical and chemical engineering.

The programs are an evolution and replacement of the Ph.D. in engineering, a degree program established in 2014. Other Ph.D. programs offered at RIT include mathematical modeling, color science, sustainability, astrophysical sciences and technology, microsystems engineering, imaging science, and computing and information sciences.