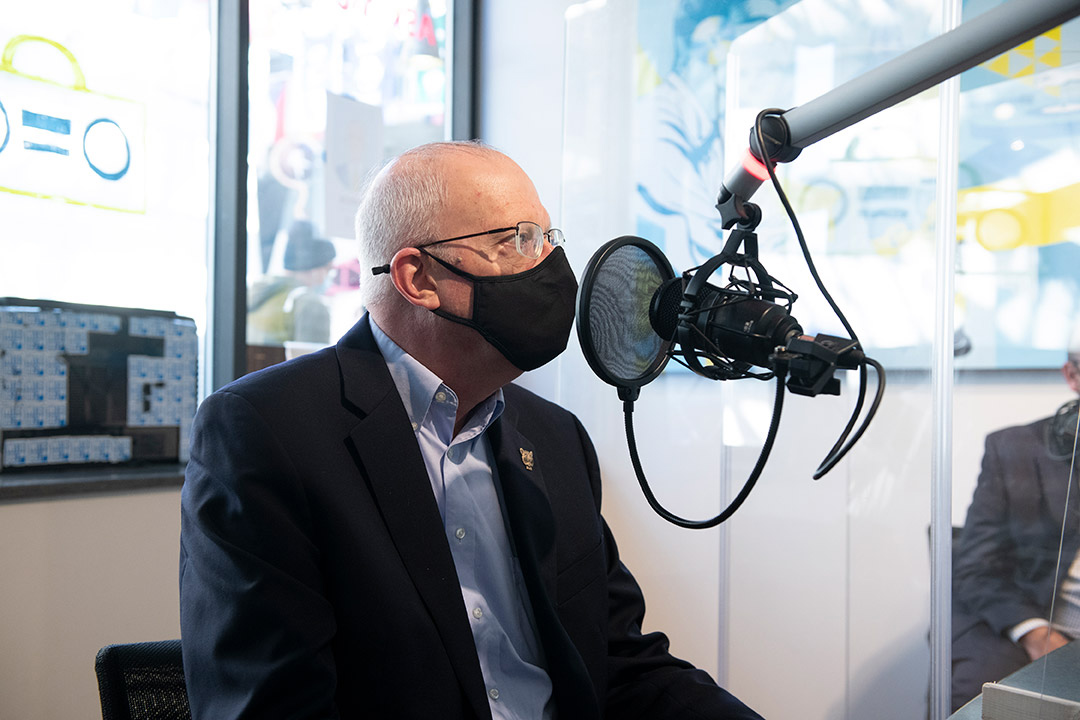 As more people receive the COVID-19 vaccination, RIT President David Munson said more restrictions will likely be lifted as the number of positive cases of the virus dwindle on campus, in the community, and in the world.

“With more people vaccinated, it’s safer to have more people back on campus with a little greater density, and we want to be creating a little bit more of a normal campus atmosphere before the end of this semester,” Munson said during his latest “Ask Munson” question-and-answer interview Wednesday on WITR (89.7) radio.

It has been a full year since the RIT campus closed and classes went online as the pandemic spread. Millions of dollars have been spent improving air filtration systems in buildings, installing barriers, testing, enhanced cleaning, and other modifications that have helped keep the campus and its students, faculty, and staff as safe as possible.

“I think for RIT, almost everything has gone well,” Munson said. “I credit our students. You students have followed the rules so well.”

He also credited RIT’s administration for planning, the faculty for transforming the way they were teaching, and staff members, who were involved in everything that has been done.

But he admitted he was a bit concerned in January when everyone needed to be tested again before coming on campus. Those tests yielded about 180 students and 40 employees who tested positive for the virus and needed to be healthy before they were allowed to return to campus.

“We wondered what we’d be in for,” Munson said. “But as you know, we’ve been testing the entire student body every week, and typically we’re finding about one positive in every 1,000 students. And that prevalence of virus is just astonishingly low, much lower than the surrounding community. Kudos to our students. Let’s keep it going.”

If the declining trends continue, and if everyone continues to keep vigilant, he said, everyone should be optimistic for a more normal fall semester.

“It won’t be completely normal. But it will be mostly face-to-face classes,” Munson predicted. “And yeah, people still might be wearing masks. But we would expect a lot more of the social distancing guidelines will be a bit more flexible. And I think it will feel way more normal than this semester has.”

He recalled a student he was recently having lunch with aptly summed up the vibe he feels on campus.

“He said every day feels like Sunday,” Munson said. “I look out my windows from Eastman Hall and wow, there just aren’t as many people as normal out on the Quarter Mile. And you go in buildings and a lot of people just aren’t there. So many people are working from home. We’re actually going to work to start changing it before the end of the semester. We have a lot of people who have been vaccinated.”

And when asked if two years from now he thought things would be back to normal, Munson said it depended on the viral status in the world, not just on campus.

“I would hope by then nobody is wearing masks because by then we just don’t need to,” he said. “I would hope the world has defeated the virus. But it’s not just a matter of the United States defeating the virus, or New York state defeating the virus. It’s a worldwide problem because people travel. Will the virus be pretty well eradicated in Africa, in South America, in Asia, what have you? Because it’s not just us. This is a worldwide problem. But I’m very optimistic that we will have few or no restrictions a couple of years from now.”

Munson said he wouldn’t have done anything differently since the pandemic hit.

“We took some precautions that maybe we didn’t have to, but we didn’t know how bad things might get,” he said. “You could always go back and say hey, we could have saved money on this, or maybe we didn’t need to do this much cleaning. Some of those things are true, but I think given what we knew at the time, I think we made the best decisions we could. This virus is deadly. We just had to be so careful. I’m just very happy about how it has turned out. This is just not a credit to me. I’ve had an amazing team that I’ve been working with. It’s a lot of group thinking, a lot of group decision making. Many, many heads are way better than one. People from every segment of the university have been involved.”

The final “Ask Munson” session this academic year is planned on WITR on April 28.