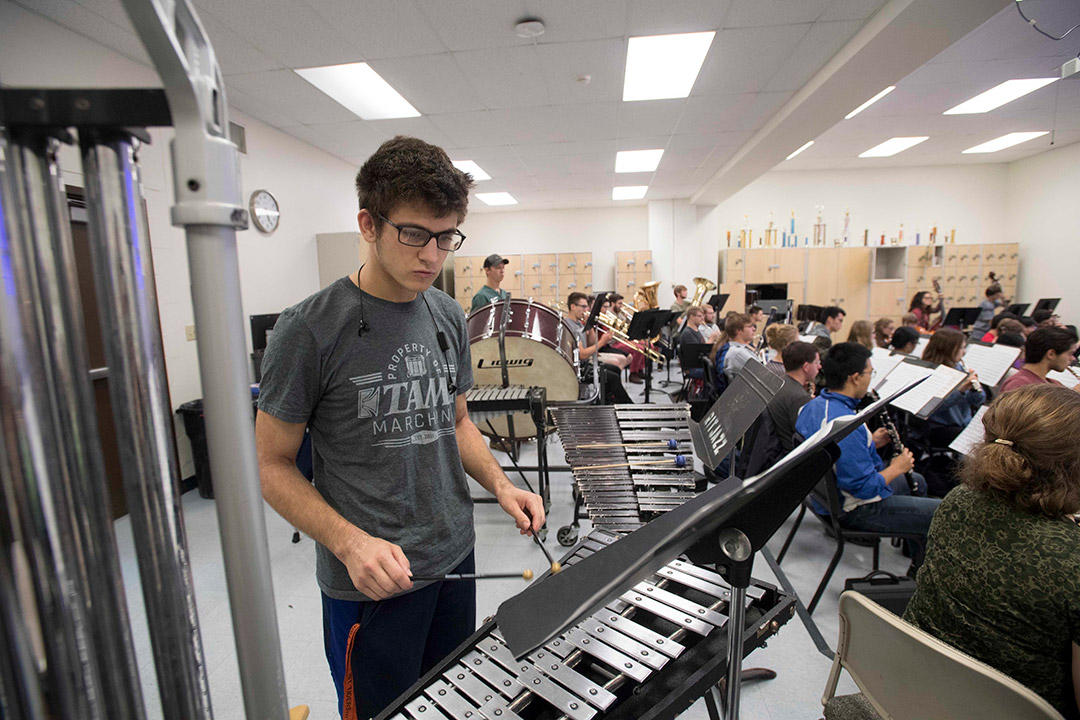 In an effort to help Rochester Institute of Technology develop the leading performing arts program in the nation for non-majors, nearly 150 first-year students interested in performing arts this year received partial scholarships.

The new performing arts scholarships, totaling just under $200,000, were awarded to 94 students interested in vocal or instrumental music, 22 for musical theater, 14 for dance, 10 for acting and eight for technical production. The scholarships are renewable for up to five years as long as the student is involved in performing arts.

One of the students, Josh Gudesblat, a percussionist from Downingtown, Pa., said his scholarship swayed his decision to attend RIT to study mechanical engineering technology.

“It honestly was a big factor,” he said. “The RIT scholarship not only allows me to continue my music, but encouraged me to do it. That was the deciding factor.”

Gudesblat was named section leader of mallet percussion for the RIT Philharmonic Orchestra and is a member of RIT’s Pep Band.

“I love music with a burning passion,” he said. “Even though I was going to college for engineering, giving up music was not an option. Music is my rock. It provides me with so much joy and relaxation and I know no matter what’s going on, I can be accepted. I refuse to give that up.”

Another scholarship recipient, Ndidi Chimah, a hospitality and tourism management major from Owings Mills, Md., has been acting for about 10 years. She plans to audition for a play in the spring.

“Acting makes me feel happy because it makes me feel calm. It makes me feel energetic. Acting fuels me,” Chimah said. “I like acting because it allows me to leave my life and live the life of someone else. I get to fully embody this new person. I am no longer me anymore for the time being and I love that.“

Kruger, chair of RIT’s Department of Performing Arts and Visual Culture, said RIT President David Munson and the administration proposed the idea for the scholarships more than a year ago to help find more engaged and creative students. Only 10 percent of RIT students were involved in performing arts, compared to up to 60 percent in other technological universities.

With this first class of performing arts scholars, Kruger said membership in performance groups on campus have already increased, and more music and theater faculty members have been hired.

Also, more venues are in the works for students to practice and perform, including a black box theater, rehearsal space and stages that may be included in the Innovative Maker and Learning Complex, estimated to open in the fall of 2022. Plans are also being discussed for a new “music performing theater” building, currently in the design stage with a possible construction start late next year, Kruger said.

The scholarship winners have been invited to field trips to see concerts and theater productions in Rochester, and to social events like pizza parties to help them become more engaged with faculty members and their peers.

“We’re hoping to build a community and get them immersed in the local arts scene,” Kruger said. “We’re already seeing more interaction between this group of students and the faculty as a result.”

“The more creative options we offer students, the better likelihood they will carry that creativity into their academic lives as well,” he said. “RIT has the unique ability to offer its students experiences that intersect technology, art and design, and we’re delighted we can help promote those opportunities to them.”

Thomas Warfield, RIT’s Director of Dance, also welcomes the opportunity to encourage more students into performing arts, and says the scholarships “provide students an opportunity to engage the mind, body and emotions into a collaborative expression of what it means to be human – an integrated educational experience. These scholarships instill a greater sense of belonging, motivation and accountability. Students discover their voice, grow in confidences and develop empathy and ethical insight, which creates a more inclusive and caring campus community.”

More than 1,000 students participate in RIT-recognized performance groups and activities each year, and 95 percent of them are enrolled in colleges other than Liberal Arts. Student performers come from all nine RIT colleges.

There are 27 theater, dance, music or other performing arts organizations on campus, including nine academic ensembles in the College of Liberal Arts and two choirs: the RIT Singers and RIT Gospel Ensemble. There are also seven a cappella groups on campus.

Since 2011, 438 RIT students have graduated with a minor, immersion or a certificate in a performing arts field.