The Vignelli Center for Design Studies collects, preserves, and makes accessible the archives of designers LeIla and Massimo Vignelli, along with other 20th and 21st century designers for research, education, and creative inspiration. We are proud to feature select projects collected from talented RIT faculty, staff, and students that were inspired by the Vignelli Center’s artifacts.

Lella and Massimo married in 1957 and together they established the Vignelli Office of Design and Architecture in Milan in 1960.

Lella then moved to Chicago and joined Skidmore, Owings & Merrill in 1959 as a junior designer in the Interiors department. In 1965, Massimo co-founded the Unimark International Corporation and Lella became the head of Unimark’s Interiors department a year later, in New York. In 1971, the Vignellis established Vignelli Associates, with Lella Vignelli as executive vice president, and Lella later served as chief executive officer. In 1978, the couple formed Vignelli Designs, a company dedicated to product and furniture design, of which Lella later became President.

Lella's work was widely featured in design publications in the United States and abroad. Examples of her and Massimo’s work have been included in the permanent collections of numerous museums, including the Museum of Modern Art, the Cooper-Hewitt Museum, the Metropolitan Museum of Art in New York, the Muses des Arts Decoratifs in Montreal, and Die Neue Sammlung in Munich. Exhibitions of Vignelli's work have been shown internationally. The major exhibit titled “Design:Vignelli” toured Europe between 1989 and 1993.

Many of Massimo’s landmark projects are now archetypes in the history of design, namely, the corporate identity program for American Airlines (1967), the graphics program for the United States National Park Service (1977), the design of St. Peter's Church in New York (1977) and the original subway map for New York Metropolitan Transportation Authority (1970).

Massimo was born in Milan, Italy, in 1931, Massimo Vignelli studied architecture in Milan and Venice between 1950 and 1953.

In 2010, renowned designers Massimo and Lella Vignelli donated their career archive to RIT, where the collection is the major resource at the Vignelli Center for Design Studies. The 19,000-square-foot facility is shared space with the University Gallery. This world-class facility is a design museum accessible to students, faculty, professional designers, and scholars from all over the world. The Center now sustains the Vignelli goal of “better design for a better world" and serves as a prominent legacy to the Vignellis and other influential Modernist designers.

Massimo Vignelli designed the building that houses the Vignelli Center, which is comprised of two geometrical cubes - one made of glass and one made of brick - that symbolize the Modernist, simplistic design philosophy of the Vignellis. The construction project cost nearly $4 million. The glass cube features two exhibit galleries, sponsored by the Benetton Company displaying graphic design, product design, and furniture. Offices and the Helen Hamlyn Trust Study Room occupy the glass side. In contrast, the brick cube houses the Vignellis’ extensive archive.

Today, the Vignelli Center is an international hub for education, preservation, and advocacy. Its unique resources serve as a destination for professional designers, students and scholars from around the world. The Center's distinctive archival resources of Modernist pioneers work in tandem with relevant programming to provide a dynamic learning environment on the RIT campus.
Through its monthly speaker series, the Vignelli Center fosters important dialogue about design in society and commerce. Each year, the Center brings notable designers to campus for insightful presentations that are open to all.

“RIT is one of the few schools in the world that has a place where design students learn about the history of design from contact with real artifacts,” said R. Roger Remington, the Vignelli Distinguished Professor of Design and Former Vignelli Center Director. “They are not looking at slides or photographs, but working with the real book, the real model, the real production piece.” 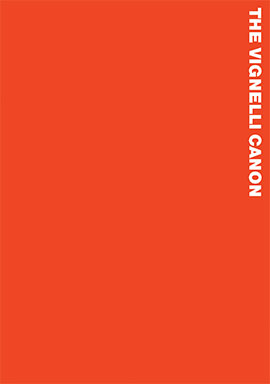 Massimo Vignelli allows us a glimpse of his understanding of good design in this book, its rules and criteria. 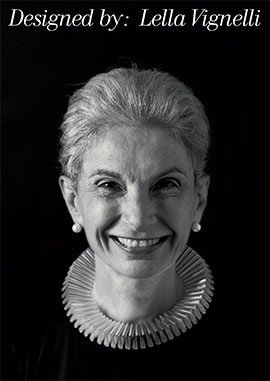 To celebrate 50 years of their partnership, Massimo Vignelli published a book of the work of his partner and wife, Lella.

In 2003, Lella and Massimo Vignelli received the National Design Lifetime Achievement Award. The Vignellis received honorary doctorates from the Rochester Institute of Technology. Additionally, Lella received honorary doctorates from the Parsons School of Design, New York and the Corcoran School of Art, Washington D.C. She also received the President's Medal from Rochester Institute of Technology, Rochester, NY. Massimo was awarded inclusion in the New York Directors Club Hall of Fame in 1982, the AIGA Gold Medal, the first Presidential Design Award in 1975, and the Medalist Award from the Architectural League in 2010.

Professionally Massimo has provided leadership for the Alliance Graphique Internationale (AGI), the American Institute of Graphic Arts (AIGA) and The Architectural League. Several feature length films and videos have been produced documenting the Vignellis and their design work. Among these are works by John Jacobson, Roberto Guerra and Kathy Brew. Their latest video “Design is One” released in 2012